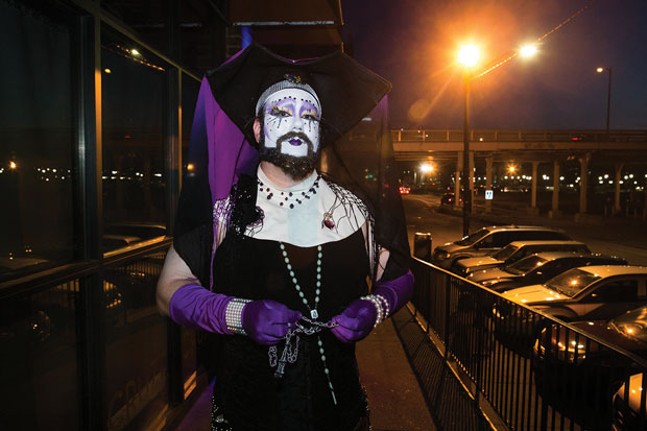 They dress in habits and minister to the community, but these nuns are a little different than your usual sisters.

You may have seen them at the Three Rivers Arts Festival: dressed in white face, most with full beards. They’re the Steel City Sisters, “a 21st-century order of queer drag nuns whose mission is to spread joy, stamp out guilt and serve our community,” says Sister Petra, a founding sister.

Sister Petra Pyper Pictapekhov, who asked that her real name not be used, explains that Steel City Sisters are a mission of the Sisters of Perpetual Indulgence, meaning they’re still proving themselves to the larger organization, a nonprofit group with chapters around the world.

The Sisters of Perpetual Indulgence started in the Castro neighborhood of San Francisco in 1979. The legend goes that a group of gay men came across some discarded nun costumes from an erstwhile production of The Sound of Music. It was Easter, and they decided to don the habits and walk around the neighborhood.

“They made such an impression on people with the look, and they realized they had a voice,” Sister Petra says. This was soon before the beginning stages of what became the AIDS crisis; the misunderstood disease was originally known as GRID, or gay-related immune disorder (or in more derogatory terms “gay cancer”).

But during that time, the Sisters of Perpetual Indulgence found their mission: ministering to HIV-positive people in the LGBTQ community, which in the early days meant comforting the sick and raising money for AIDS research. Nowadays, it means carrying safer-sex materials, including condoms, for distribution.

Sister Petra says the Sisters of Perpetual Indulgence were responsible for creating the first safer-sex pamphlet that explained things in non-clinical terms. The Sisters were also part of the first AIDS memorial quilt, honoring 30 of their deceased members, affectionately known as the Nuns of the Above.

There’s a formal structure within the organization, much like the traditional Catholic religious orders of nuns. Would-be members go through stages, beginning as aspirants, working up to being postulants and then novices, performing missionary acts along the journey to becoming fully professed members.

For instance, one of the novices within the Steel City Sisters is working on a remembrance veil. It’s a take on a Sisters of Perpetual Indulgence tradition: a veil featuring the names of those in the community who have died from HIV/AIDS. The Steel City Sisters’ version will include the names of all those who have died in the local LGBTQ community. It’s making the rounds at gay bars in the area for people to write the names of their loved ones and will be shared at the EQT Pride Equality March on June 11.

Sister Petra was inspired to start Steel City Sisters a year ago, after the Pulse nightclub shooting in Orlando which left 49 people dead. The fact that the shooting occurred at an LGBTQ nightclub on the eve of Pride Week really motivated her to take action. “I wanted to do something, to have some agency in this world and cause positive change,” Sister Petra says.

Each house of the Sisters of Perpetual Indulgence focuses its charitable works on a specific need in the community. For some chapters, that may be helping fight drug abuse, or reducing the number of STDs. For the Steel City Sisters, there was almost unanimous agreement that they wanted to help Proud Haven, an organization that serves homeless LGBTQ youth. Many LGBTQ kids face identity-based rejection at home or at school, and end up in unstable living environments or homeless. While Sister Petra has experience working with troubled and traumatized youth, who make up 40 percent of the national homeless youth population, most of what the Steel City Sisters do for Proud Haven focuses on raising awareness and money. Proud Haven doesn’t have its own shelter yet, which is one of the key goals.

The Sisters of Perpetual Indulgence may not ascribe to all of the Catholic Church’s teachings, but Sister Petra says they and the chapters try to adopt the parts of the religion that foster kindness and ministry. And although the membership is predominantly gay men, anyone is free to join either Steel City of Perpetual Indulgence — “even cisgendered heterosexuals,” she adds.  While they deal with serious issues of safer sex and homeless LGBTQ youth, the Steel City Sisters do put a big emphasis on spreading happiness.

The white face paint is actually a big part of that, which is a tradition that began with one Sister of Perpetual Indulgence, Sister Vicious Power Hungry Bish, who had worked in the theater. “It gives us a street-theater aspect,” Sister Petra says. “People really trust you when you’re wearing the white makeup. And I think it sends the message that if we can go out in the world looking like this, then you can be whoever you are.”

In Orphans, a cutting-edge acting technique comes to life at one of the area’s newest theaters