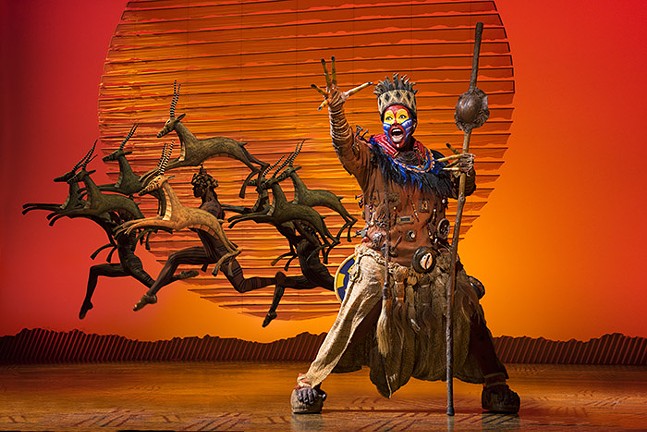 Photo: Deen van Meer/Disney
Buyi Zama as Rafiki in The Lion King
Squeals of laughter and applause erupted throughout the theater as the parade of animals marched to the stage of The Benedum Center at the beginning of The Lion King. The animals came from every direction — first stage left, then right, the balcony, and down the aisles from the back. Actors with stilts attached to all four limbs, mimicking the height of the giraffes they were portraying; leaping antelopes, attached to heads and arms; birds floating above beautiful women dressed all in white; an elephant moving with the help of multiple actors; the most gorgeous cheetah — who moved so gracefully, it was easy to forget there was a human attached to the puppet — I’ve ever seen.

Confession: I wasn’t familiar with The Lion King before this performance. I have never even seen the movie (to the shock of my millennial coworkers who grew up with it playing on their television sets). I don’t have children, and I was in college when the first film was released, so it was just one of those things that I accidentally missed. All I knew was hearing bits of the goofy song "Hakuna Matata" and the overplayed "Circle of Life" song Elton John (who co-wrote most of the music for the Broadway production) sang way too often on soft-rock radio stations, and that Disney decided to remake the original 1994 animated film this year, something that social media was first psyched about — Hello, Beyoncé!, amiright? — then scorned after seeing the disappointing previews.

So now I’m going to go ahead and scorn everyone who didn’t force me to see this stage performance before now because I had no idea what I was missing. The actors in Disney’s North American Tour of Broadway’s The Lion King, playing at the Benedum Center through Sun., Sept. 29, were some of the most gifted dancers and puppeteers I’ve had the pleasure of watching on stage. With a twist of their bodies, they became the animals they were playing. The costumes were as beautiful as the choreography, as was the stage itself; sets dancing in sync with the actors as scenes changed. Every single piece of this show is a work of art.

I honestly believe I wouldn't have needed a story, or even songs, to enjoy the performance because I could have watched the artistry of the dancing and puppetry for the entire two hours on their own. But there is a story for those interested in a plot: a classic coming-of-age tale of good versus evil.

The story begins as King Mufasa (Gerald Ramsey) and Queen Sarabi (Chante Carmel) introduce the animal kingdom to their new son, young Simba (Richard A. Phillips Jr. and Walter Russell III). Simba is raised to be the future king, alongside his best friend Nala (Brilyn Johnston and Celina Smith) and his nerdy but lovable bird caretaker Zazu (Greg Jackson).

After an evil plot twist kills Mufasa, Simba leaves home, believing it was he who caused his death and not actually Scar (Spencer Plachy), his evil uncle who plotted his brother's death so he could be king, then sending off hyenas to attempt to kill his young nephew.

Simba leaves the kingdom in shame to start a new life, along the way making new friends, including kids' favorites (judging from the sound of the giggles from the children near me during the show) meerkat Timon (Nick Cordileone) and warthog Pumbaa (Ben Lipitz), who sing the famous "Hakuna Matata" song and make a lot of fart jokes. 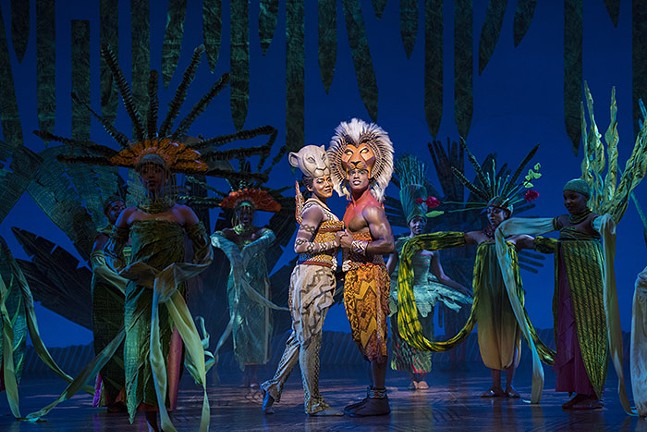 Photo: Deen van Meer/Disney
Nia Holloway and Jared Dixon in The Lion King
After he's grown up, Simba (Jared Dixon) is visited by adult Nala (Nia Holloway), falls in love, and realizes he must return to his kingdom to return it to its former glory and rightfully reclaim his throne in the name of his father. Ah yes, the classic Disney happy ending.

There are gorgeous songs too. Rafiki (Buyi Zama), a baboon witch doctor who serves as the narrator of the story, has a voice meant for the stage, a mix of English and African dialect booming throughout the theater during her solos. But, for me, the best songs in the production are the ones that simply serve as backdrops to the amazing choreography — like when the mourning lionesses pull ribbons of tears from their eyes during "Nao Tse Tsa," an image that stayed with me hours after the curtains were drawn.

Someone remarked to me afterward that it was the perfect show for children. I actually found it remarkable that although there were occasional restless cries from the youngest in the theater, many of the kids in the audience did stay transfixed throughout the long play. To me, though, while the story is an uplifting kids’ tale and a fine introduction to Broadway performances for a younger crowd, the performance can best be appreciated by adults. (Even after taking away the fact that there are incredibly muscular, bare-chested actors on stage throughout the show.)

To kids who grew up with computer-generated animations and are constantly subjected to 3D movies and life-like video games, I imagine that while a stage performance like this is fun to see in person, it isn’t unlike things they’ve already been seeing on movie screens their entire lives. But to me, the way the actors were able to move their bodies flawlessly and transform from head-to-toe to into a cheetah, a giraffe, and a roaring lion by twisting and contorting their bodies, it was a breathtaking performance best appreciated by adults who realize the difficulties of the artistry.

For anyone out there like me, who let this one slip by you in the past: Go! It was, simply, magical.