A Swedish dark comedy, set in the art world, that explores how fragile society’s veneers are 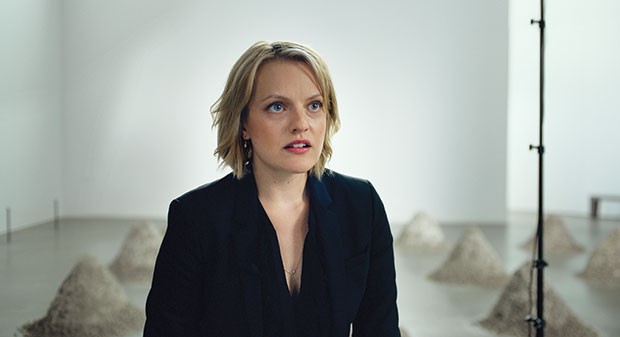 Elisabeth Moss, in The Square
In English and Swedish, with subtitles.
Harris

Ruben Ostlund’s previous film, 2014’s Force Majeure, zoomed in on how one institution — the family — fell apart when the dad violated a basic tenet of familial relationships. It was a cringey, meditatively paced dark comedy you either dug or found obtuse and boring.

In The Square, Ostlund reaches for a similar theme, but widens the lens, incorporating a satire of the modern-art world, with several painful dissections of how fragile society’s veneers are, and how poorly we fare when forced out of our comfort zones.

Christian (Claes Bang) is the articulate, handsome and polished curator of a contemporary-art museum in Stockholm (currently exhibiting Mirrors and Piles of Gravel). In a bizarre street encounter, his wallet and phone are stolen, setting off several cascading crises in his otherwise sleek and well-ordered life. He neglects to fully listen to a PR pitch, resulting in an ill-advised viral video campaign; he drunkenly beds a reporter (Elisabeth Moss); and he turns the search of his missing phone into a micro-drama of class warfare, in which he wields, among other tools of privilege, the “Tesla of justice.”

It’s a long film, but in its two-and-half hours it finds plenty to critique: the pretentiousness of the art world (including its ponderous language designed to exclude and conceal); modern lives lived in individual silos illuminated by smartphones; the casual cruelty of the privileged; the fraught communication between the sexes; and the limits of liberal tolerance.

In its most talked-about scene, involving a gala dinner at the museum, Ostlund also explores the limits of uncomfortable performance art, vis-à-vis the social order of groups. This unforgettable scene features real-life Swedish art patrons and Terry Notary, a noted motion-capture actor who specializes in apes (Planet of the Apes trilogy, Kong: Skull Island).

The Square is not especially subtle or groundbreaking, but its presentation is often quite novel. If you can manage the odd pacing and the loose plot, there is quite a bit of dark humor amid the discomfort. Freedom of expression is, of course, a cherished liberal value, but consider the obfuscation of a press conference, or the “edgy” art star (Dominic West) undone by hurled profanities during his museum Q&A.