The spellbinding psychedelic blues of All Them Witches

“Blues music isn’t a guy sitting with his acoustic guitar on a dusty road anymore.” 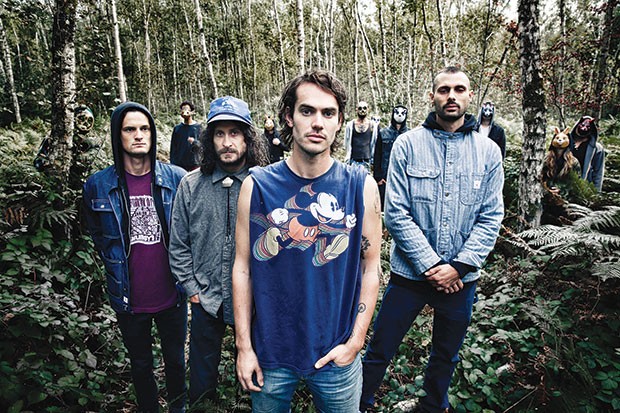 Photo courtesy of Paul Harries
All Them Witches, in the woods

ALL THEM WITCHES WITH HANDSOME JACK

Nashville-based All Them Witches play a modern variety of psychedelic blues. The four-piece group’s heavy music has caught on with audiences in a big way; like the four albums that came before it, 2017’s Sleeping Through the War is earning near-unanimous critical acclaim. The band is currently on an American tour that runs through mid-June (including two nights at Pittsburgh’s Club Café); then it’s off to Europe for a series of concerts and festival dates.

All Them Witches aren’t constrained by genre classification. “Labels are just for people to relate to themselves,” says Charles Michael Parks Jr. (he generally answers to “Parks”), the band’s bassist-guitarist-vocalist in a recent phone interview with City Paper. All Them Witches are occasionally likened to doom-metal band The Sword, for example. Parks believes that when a fan tells him, “You sound like The Sword,” what they really mean is, “You remind me of how I felt the first time I listened to The Sword.”

And looking at it from that perspective, Parks has no problem with the labels or comparisons. All Them Witches’ music doesn’t fit neatly into any one genre, especially since definitions are subjective and fluid. “The blues are still well and alive in modern times,” Parks points out. “But blues music isn’t a guy sitting with his acoustic guitar on a dusty road anymore.”

All Them Witches has made a point of recording some of their albums using unusual methods. A 2013 EP was recorded using only two microphones; the band’s 2015 album Dying Surfer Meets His Maker was recorded in a cabin in rural Tennessee. Parks believes that various recording methods do have an effect on the nature of the final product. “Experimentation helps us not get locked down,” he says.

Unlike groups who believe that audience recordings of shows cut into artist profits, All Them Witches don’t discourage fans “taping” their concerts. “I love the culture of capturing a live show,” Parks says. He notes that a lot of bands have done great shows “that never get heard by anybody else,” and trading recordings does away with that limitation. “I encourage it,” he says.

After several years as an independent act, All Them Witches signed with New West Records in 2015. Things changed quickly for the band. Up to that point, guitarist Ben McLeod had been handling booking and other business matters. With those tasks delegated, Parks says that All Them Witches “get to be a band — we don’t have to worry about that other stuff.”

Parks describes the band’s relationship with New West as “adding more people to the team that have the same goal. They just let us do what we need to do to get the music out.” He notes that the character of record labels has changed a lot since the music-business heyday of the 20th century. “Now,” he observes, “a lot of the labels are owned by musicians; they played in bands when they were younger.”  With a chuckle, he adds, “I’m not scared of a label exec coming and taking over my stuff.”

Getting the music out hasn’t been a problem for All Them Witches. If one includes all of the band’s output — singles, EPs, live albums and studio releases — the group has released well over an album’s worth of music every year since 2012. And while some have suggested that the band’s music has a wider appeal now than on early albums like 2013’s Lightning at the Door, Parks says there’s no intention to make that the case.

“We’re not trying to make it more accessible to people,” Parks says. “It’s just the natural progression.” Some artists might say that they do it all for the fans, but songwriter Parks is more honest with himself. “That’s a really good notion,” he concedes, “but I feel that’s kind of a lie. Because writing songs is the only way I can go to sleep at night. I do this for myself, and I do it for my friends.” He adds, “Anybody is welcome to show up” and enjoy it if they choose.

In the studio, All Them Witches makes judicious use of modern technology, but the band is careful not to take it too far and risk losing the qualities that make the group unique. “We’ve always done everything live in a room,” Parks says. “So what you hear on the basic track is all there — it’s all live.” And the group limits its use of on-board studio effects, choosing instead to get their distortion the old-fashioned way. “It’s all volume,” laughs Parks.

Not everyone loves the band’s dizzying, bone-crushing riffage on cuts like Sleeping Through the War’s “Don’t Bring Me Coffee.” Parks recalls a dissenting, negative review of an All Them Witches release. He says the writer characterized the album as “proof that we could just slap a colorful cover on a record and record 46 minutes of sleepwalking.”

“And that’s totally fine,” Parks says with a good-natured laugh. “Music is not made for one person.”  Bringing the discussion back to the blues, Parks emphasizes that All Them Witches make music that feels right to the band members. “A lot of people are still hashing out that Delta blues stuff, but they’re from a rich family in the suburbs or something,” he says. “I grew up as far from the Delta as possible. But I feel we’re writing the blues from our perspective.”

Choose Your Own Adventure: Two shows, one day