Reflections on watching the siege on the nation's Capitol 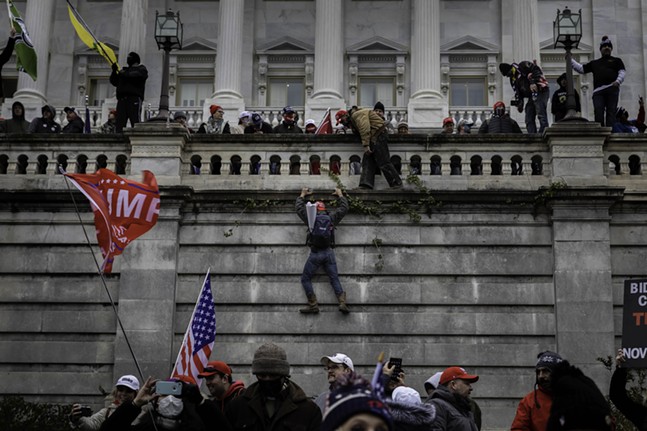 Not turning off my phone for an hour, only to turn it back on and staying up until 12:30 in the morning from where I’m currently living in Izmir, Turkey. Not waking up at 5 a.m. to see even more horrific images from the nation’s Capitol building under siege. Not eating rose-flavored lokum (Turkish delight) at 5 a.m. Not scrolling through more images and video to see international and local reactions of the day’s events — from shock to glee. Not making pancakes and pouring the hard-to-find and overpriced bottle of maple syrup on top.

Nothing was helping my mood of anger because I did not know what I actually wanted to happen. Not really, not in that instant.

Sure, on one hand, I wanted all of Pittsburgh’s sinkholes, revealed and those lying in wait, to magically appear in Washington, D.C. and swallow up not only the terrorists and insurgent white people who were attempting a coup d’etat, but also their police, congressional, military, and White House enablers. Transporting them alive — I am not in the position, power, or mindset to condemn anyone to death — to where, I did not care, as long as it was no longer on this planet. Because I also wouldn’t wish them on any other country on Earth.

Nothing was helping. I was unable to move from the couch. A beautiful, hand-knit sea blue and grey wrap made lovingly by my boyfriend’s mother — a New Year’s Eve gift — wrapped around my shoulders; not even then could I find peace, comfort.

Not looking at images of my great great grandfather, great grandparents, and grandparents, hoping some understanding of their endurance and ability to find joy, love from the 1800s to the mid-20th century would seep out of my DNA and into my brain. Grandma, how did you do it? Laugh, smile, make children in a country that hates us so much? In a country that owes us everything and has not even begun, not even begun, to pay back the debt.

Finally, my boyfriend turned on the TV and tuned to BBC News. There was something about seeing the images on a huge screen that turned the screws of the barbed wire of anger that had grown so quickly like an unwanted vine around my heart, or was it there all along? Squeezing, squeezing until a wail, a cry, and then tears ... so many tears. I could not stop.

I cried because I do not have a country. I cried because I, as a Black woman, have one of biggest payment-due bills of any peoples on this Earth, and in America. Realizing therefore that not only do I have a country, but that I AM America. That Indigenous and Black people of this land are the soul of the country and because we are treated as second and third-class citizens, America has no soul until we have justice.

Seeing those white men and women storming the Capitol building felt like a personal violation, entering the People’s House. I yelled seeing images of the Black Capitol employees sweeping the glass off the floor, cleaning the mess of violent whiteness again. How many centuries has this gone on?

I screamed to no one, reading social posts from “woke” whites and their white allies of color who were stunned, shocked, and horrified of: 1.) Such a violent display and 2.) That most of the white people were left to go in peace. I yelled at the TV screen to President-elect Joseph Biden for saying that this is “not America” when it clearly, very much is, and then thinking, “Is this what I am waiting for? For this white man to come to office to replace another white man?” Was the president-elect only talking to white people when he said that? The only ones who could believe such a myth?

I kept shaking my head so much that I did not know if my head would ever stay in one place, or maybe being dizzy would be better than consciousness.

I thought about all of the myth-making, propaganda, and white-centric violence I have been force-fed to believe is civilization, the peak of civilization, since birth.

Throughout this time, the past four years and more, but especially these past four years, I think of my young nephews and my nearly century-old father, who should not, at the beginning or ending of a life, have to live in this constant state of anti-Black, white violence. Of course none of us should. This multiple pandemic time. This super spreader event of multiple viruses.

(Insert deep breath) Here is the space where I am meant to offer up some hope. During my crying fit, my boyfriend — whose Turkish name actually means hope — held me as I cried and said that there is, in fact, well, hope. He said that these people, this system, cannot endure. That in America, there is opportunity for real justice. “At least Biden will do something, right?”

He meant to say it as fact, but it sounded more like a question. Seeing the look of doubt on my face, he mustered up his resolve, and said, “It will be better, you’ll see. It will be OK, stop crying now, please, stop crying.”