Sewickley may be a riverside town, but it doesn't quite offer an oceanfront vibe. Nonetheless, the owners of The Slippery Mermaid sushi house on the Florida panhandle chose this Pittsburgh suburb to open a second location.

This explains the decor, which couldn't be farther from the reserved, lacquer-and-calligraphy clichés of most Japanese restaurants. Deep turquoise walls, paintings of mermaids and dolphins in tropical tones, and a mosaic of weathered wooden louvers, stained in oceanic hues, evoke an atmosphere more Caribbean than Pacific Rim. Boppy '80s tunes convey a carefree, vacation vibe in a way that the enigmatic pluckings of the shamisen just can't. The restaurant's tongue-in-cheek motto — "Let's roll a fat one!" — confirmed that if traditional Japanese restaurants are kimonos and geta sandals, The Slippery Mermaid is shorts and flip-flops.

In fact, even though the menu consists almost entirely of sushi, we would stop short of calling The Slippery Mermaid a Japanese restaurant. The website puts it best: "We are not settling for authentic," it proclaims. "We are striving for inventive!" While a handful of strictly traditional maki, nigiri and sashimi are offered, by far the bulk of the lengthy menu is dedicated to creative rolls.

And when we say lengthy, we mean three jam-packed pages of just about everything you can imagine rolled in rice, and it doesn't stop at seafood. Cream cheese and avocado are by now familiar in American sushi rolls, but this was the first time we'd seen bacon, steak or chicken. Sushi skeptics take note: Non-sushi selections are extremely limited (think miso soup, seaweed salad), and there are no hot entrees.

The choices and combinations are myriad and have names like Psycho Mermaid, Crabby Sailor and Triton's Triple Tuna. Frankly, the menu could be better organized. Local Favorites, which consist largely of relatively straightforward maki, are listed after the Extra Ordinary Rolls, consisting of jazzed-up Local Favorites. So many were the variations that we could have used an app to, for instance, show us all the rolls with salmon and tempura crunch.

Tempura crunch is what it sounds like — tiny nuggets of deep-fried batter — serving a role not dissimilar to tobiko, the roe that provide salty pop in many classic sushi preparations. Too much of this good thing could have been an affront to the fish, but it was applied with a judicious hand which carried through to the other ingredients, as well. We appreciated that even the roll called Whale of a Roll wasn't one of those massive maki that seem to demand knife and fork over chopsticks. This despite it containing yellowfin, housemade surimi (imitation crab) and avocado, and being topped with more yellowfin (seared), tempura crunch, scallions and sweet chili sauce. The flavors and textures were balanced in each miraculously bite-sized slice of roll.

Such rolls often seem like stunts designed to impress with a striking presentation, not flavor. But the Mermaid's sushi chefs manage to get creative without losing respect for their ingredients. The Dixie roll, in which yellowfin was paired with items more commonly found on a bagel — bacon and cream cheese — offered the same sort of balanced and complementary flavors and textures as a salmon-skin roll. The bacon was smoky and crunchy, the cream cheese rich and slightly tangy, while the yellowfin provided the meaty backbone, so to speak.

A spicy octopus roll with scallions and cucumber was, likewise, a successful variant of the popular spicy tuna roll. The cooked tentacles were tender, and the spice mixture suited them well. 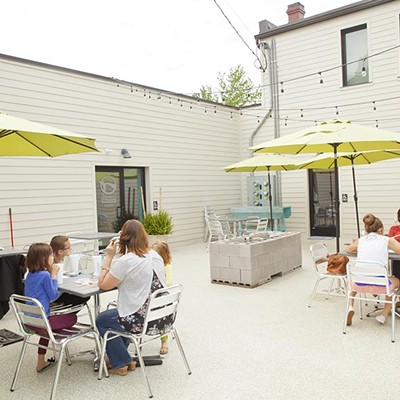 A small sashimi plate allowed us to sample the fish, and only the fish, one at a time. Broad, butterflied slices of sea scallop were perfect, sweet and buttery. Thin, cross-cut slices of octopus tentacle had tender centers with pleasant chew at the edges. Tuna is the fish that most distinguishes between ordinary and better sushi places, and the Mermaid's was on the better side — deep red and full-flavored, not pink and watery. Poke — Hawaiian fish salad — made with this tuna, however, lacked enough seasoning or dressing; as a result, it was monotonous and bland.

The Slippery Mermaid also serves escolar, also known as walu walu, which some restaurants avoid because large portions can cause some eaters gastric issues. A safely small morsel of sashimi, however, had a silken texture and subtle, buttery flavor with none of the fishiness of other oily fish.

We have always thought that sushi is delicious. The Slippery Mermaid also makes it fun and exciting — without going overboard.