The simple pleasures and difficulties of life on a houseboat

CP photo: Jared Wickerham
Mia Macdonald with her houseboat along the Allegheny River at the Bell Harbor Yacht Club

When Mia Macdonald's parked car was totaled, she received $5,000 in an insurance payout and used some of it to buy another car, and the remainder to buy herself a home.

That might not sound like enough for both, but in this case, Macdonald settled on a 1973 Burns Craft houseboat, named it Seamore, and moored it to a dock at the Bell Harbor Yacht Club in Blawnox. Macdonald has lived on it for roughly four years, even through the winter, when the frozen river sometimes slams into the side of the boat and sounds like "sleeping in a bowling alley." The boat has no motor, so it stays at the dock like a floating apartment.

There are only a handful of other boats docked at the Bell Harbor Yacht Club, which is not as much of a yacht club as it sounds. It has a faded sign announcing the "Yacht Club & Banquet Hall," along with a phone number that is disconnected. The banquet hall building is empty, with lion sculptures guarding nothing. If you peer through the windows, there are still remnants of a place that used to host parties, like banquet chairs and a bar made of stones.

Houseboats are generally cheaper than apartments, especially with rising housing costs in the city. According to Zillow, average rents in Lawrenceville, where Macdonald used to live, have nearly doubled since 2012. Average home prices there have more than doubled since 2000. There are no statistics about how many people in Pittsburgh live on houseboats, but it's fair to assume the number is very low, especially during the winter. It's also fair to assume that in the future, living on houseboats will become more common, as sea levels rise — the U.N. met earlier this year to discuss building floating cities.

Macdonald's boat cost around $3,000, and she pays rent twice a year to keep it at the dock. It can get expensive in the winter with the electric heaters blasting, but the overall expenses are still less than an apartment. Not having to pay for gas helps too. She plans to stay until it becomes impractical, like if she moved in with a partner or had kids.

Life on a houseboat

If you've ever been on a houseboat, or more likely, watched the TV show Tiny House Hunters, you know that a lot can be done in small spaces. Houseboats are designed for maximum efficiency, in a way that makes regular homes feel excessive and inefficient. Seamore has a bed, seating area, kitchen, bathroom, and TVs, plus the decks and roof. There’s even room for an E.T. collection.

Macdonald bought the boat while in recovery from drug and alcohol addiction, and felt that the boat — alone in a quiet place, on peaceful water — would help her. “I wanted to use it as a way to be calm and by myself and get my life back together,” she says. There are several studies that show that being around or looking at bodies of water can have a positive effect on mental health.

"I was like, if I simplify my life it'll be easier to get out of those patterns and be actually able to afford while saving money and not spending it on drugs or alcohol," she says.

This semi-isolation is part of the appeal for Macdonald, who chose to live on a houseboat in part to pare down her life. She wanted a place of her own without roommates, something affordable, and somewhere she could feel at ease.

Macdonald lives on the boat with her cat, Bubba Lou, who roams the docks and surrounding land freely. A friend helped her fashion a cat door on the boat, so Bubba Lou can come and go. One winter, raccoons found their way through it and onto the boat. “I woke up in the middle of the night hearing what I thought was my cat and it was raccoons that were just hanging out,” she says.

There are also certain vulnerabilities that come with living on a motorless houseboat that don't usually happen with an apartment on land. Once during a storm, the wind was so strong the rope tethering the boat snapped, pulling the boat out into the water, and Macdonald had to flag people down to help her reel it back in.

"I feel like just having a small place to take care of is less stressful, but I didn't know all the other stresses that would come with it, like my pipes bursting, and [the boat] sinking, and the electric going on and off," she says.

Occasionally she spends the night at her mom's or girlfriend's house and remembers the upside of a typical apartment. "It's not like an easy thing. When I go to people's apartments I'm like, 'Oh, this is so nice. Your electric doesn't turn on and off.'"

Still, Macdonald likes living on the boat because of how cheap it is and how much privacy she gets. Standing on the deck and looking out at the water, it feels far from the city (it's still technically bus accessible). There's no internet as a distraction either, just the sound of the river (and a lot of DVDs).

"I like how simple it is, and it's small, and I don't need that much," she says. 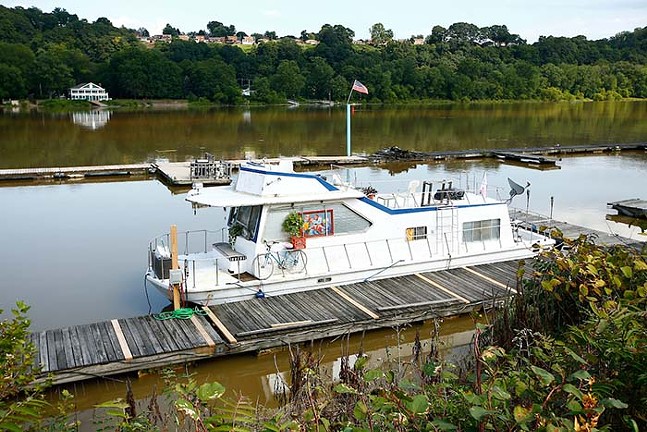 CP photo: Jared Wickerham
A houseboat owned by Mia Macdonald sits along the Allegheny River at the Bell Harbor Yacht Club.
Bell Harbor is currently cheap and mostly empty, but it might not stay that way forever.


While the Blawnox club isn't a thriving boat community, across the river in Verona, there are several, like the Algonquin Canoe Club and the Sylvan Canoe Club. In 2011, there were plans to turn the Bell Harbor property into a high-end, riverside property development of townhomes called One River Road (the address is 1 River Road), according to an article from the same year in TribLive. The article states that construction for the development was supposed to begin in spring 2012 and that each townhome would come with a dock. If you look at a street-view image of Bell Harbor on Google Maps, which has an image from 2013, it shows a Prudential Realty "coming soon!" sign.

Unlike many cities where waterfront property is highly valuable, Pittsburgh is only just now entering a period of developing restaurants and housing by the rivers.

Since 2011, Bobby Berarducci, the previous owner of Bell Harbor has died, and there's no evidence of any past or current construction on the property, except for the slow updating of the docks, which feature a few new planks scattered among the old ones. Macdonald says Berarducci's son took over, and there are still plans to put new housing in.

"I feel like once those condos go in, this is gonna look a lot different," she says. "I mean it'll look prettier, but I kinda like it. It's cheap and no one knows about it."