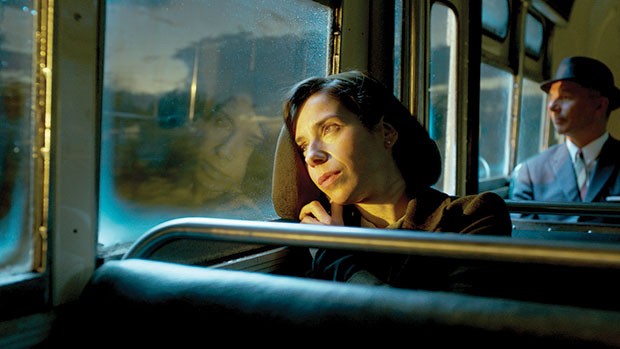 On the bus: Elisa (Sally Hawkins)

This holiday’s most romantic and life-affirming feature might be The Shape of Water, which depicts a virtually silent love affair between a cleaning woman and humanoid river monster.

Guillermo del Toro’s latest film is a hybrid combining a fairy-tale romance with a heist and a comedy. It is an homage to old-school monster movies (with a gross-out moment or two) and to classical Hollywood studio fare, with their lush musical numbers. It is also a critique of narrow-mindedness, and of those who would approach life without compassion. It’s a combo plate of disparate ingredients that work together remarkably well.

In early-1960s Baltimore, mute Elisa (Sally Hawkins) and her longtime friend Zelda (Octavia Spencer) work as overnight janitors at a top-secret government research lab. During the day, Elisa spends time with her struggling-artist neighbor (Richard Jenkins); they watch old musicals on the TV, their feet tip-tapping out the dances on the shabby carpet.

Then one night, the lab gets two new arrivals: the tightly wound, casually cruel agent Strickland (Michael Shannon) and his charge, a fishman (Doug Jones) nicknamed “the asset,” captured from the “South American river muck.” This asset has odd, possibly useful powers — he can breathe both in and out of water, and the Amazon natives consider him a god — and he’s immediately a Cold War pawn. (Stay tuned, there are lurking Soviets …)

But to lonely, sensitive Elisa, the fishman seems less fearsome than just another voiceless outsider like herself. Using hardboiled eggs and music, she befriends him; then, learning that he is in peril, she assembles a team of sympathetic souls to free him.

In Shape, Del Toro has created a candy-colored noir, illuminating a world of both magic and menace. Everything nods to classic Hollywood, while being transformed by del Toro’s affection and tweaking. The settings are just slightly too stylized, a wink at artifice (there is a perfect diner, which we learn in a meta moment is itself a construct); the villain can be vanquished; and so many cares can be shrugged off with a good song-and-dance number.

In an opening voiceover, Elisa is described as “a princess without a voice.” Like traditional fairy-tale heroines, she lives in a shabby garret and toils in drudgery; ignored by others, she nonetheless finds her prince, an ugly aquatic creature transformed by her love into her savior. This all works because the excellent cast plays it straight and with heart; only Shannon is over the top, but fairy-tale villains are allowed a measure of theatrical awfulness. Particularly marvelous is Hawkins, who without a word, can bring us into this charmed space and make us feel her profound longing for an equally voiceless “monster.”