The Science Center's BIKES is fun, but misses a lot

Along with honoring the bicycle as consumer product, why not bikes as transportation? 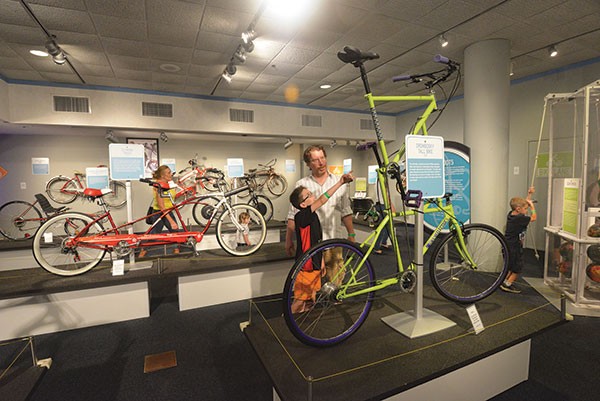 Like many visitors to BIKES: Science on Two Wheels, at the Carnegie Science Center, I had a moment of happy recognition. Where some will find semblances of their childhood bikes displayed, I spotted the 1976 Schwinn Varsity Bicentennial: a 10-speed with curved handlebars that, paint job aside, recalled the first bike I ever bought myself. I got my Schwinn Traveller III used at age 17, for $75, and rode it into my 30s.

Indeed, with dozens of models from the antique to the carbon-fiber on display, BIKES briskly catalogues the bicycle's many permutations over the past 150 years. (Exhibit partners include Pittsburgh's Bicycle Heaven and Ohio's Bicycle Museum of America.) And thanks to some engaging hands-on displays about inertia, friction and the like, visitors will learn some science. Unfortunately, however, the show largely ignores something big that happened between when I acquired that Schwinn three decades ago and when I gave it up for a more commuter-friendly model: the bicycle's evolution from toy to tool.

BIKES does offer some history. We see how bicycle forerunner the velocipede (dating to 1817!) acquired pedals in the 1860s, then transformed from the precarious, huge-wheeled "penny-farthing" to the modern "safety bike," with its drive chain. Signage notes that the 19th-century U.S. biking craze was an adult phenomenon, but that, thanks to car culture, "bikes were seen as children's toys" by the mid-20th century.

Yet viewing BIKES, you'd never know that adults today use bikes for anything but racing or recreating. Rather, BIKES lovingly documents such phenomena as how bike-makers stole design elements from cars, motorcycles and even rocket ships — not to mention such marketing flourishes as the banana seat. And the exhibit serves as a mini-showroom for contemporary recreational models, from fatbikes (with their bulbous tires) to mountain bikes and BMX — even an off-road racer with a robotic shifter.

Sure, seeing the '53 Schwinn from Pee-wee's Big Adventure is a hoot. But along with honoring the bicycle as consumer product, why not display bikes as transportation — working bikes? According to 2009 U.S. Department of Transportation numbers, 54 percent of all U.S. bike trips are strictly for transport (up from 43 percent in 2001). And the U.S. Census and the League of American Bicyclists confirm that Pittsburgh is among the cities where bike commuting is growing fastest.

BIKES notes that Europeans have long valued bike-racing — but doesn't mention that in cities like Amsterdam, at least one-third of commuters bike it. The exhibit includes a 1915 delivery bike with a built-in basket, but no example of the increasingly popular modern cargo bike — which the current edition of locally based magazine Bicycle Times (available for free at the exhibit) only half-jokingly calls "The New SUV."

The exhibit claims that 19th-century bicyclists were actually the first to lobby for the paved roads later plied by horseless carriages. Why not also highlight the contemporary boom in bike lanes, bike trails and bike-share programs? Dozens of U.S. cities have such programs, with Pittsburgh slated for its own.

One BIKES display amusingly explains that bikes are "solar-powered," because food comes from the sun. But the exhibit never plays up the health or environmental benefits of bicycles. And when an exhibit placard quotes Susan B. Anthony saying, "bicycling ... has done more to emancipate women than anything else in the world," you're left wishing for further insights on bikes and culture.

BIKES is fun. But bicycling isn't just for fun.