While this isn't a strict re-telling of Hawthorne, it does work as theater. 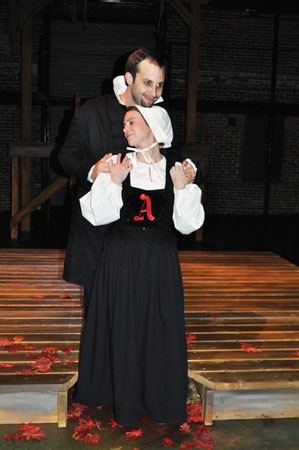 Ivy Steinberg and Justin Fortunato in The Scarlet Letter, at Prime Stage.

Ready for some literary time-traveling? In its new production of The Scarlet Letter, Prime Stage Theatre brings us a 21st-century view of a 19th-century best-selling portrayal of 17th-century New England. Think of it as two lenses: Nathaniel Hawthorne's historical interpretation of what was even then (1850) a distant past, and a modern prism on those eras from the collaboration at Prime Stage.

Playwrights Carol and Jonathan Gilligan (the famed feminist scholar and her son) reworked their 2007 script with director Katie Mueller for a new adaptation. This version compresses the action, alters and/or combines characters, and moves along with less Puritan gloom than Nate enjoyed. Not surprisingly, this Letter is more overtly feminist and sexual, but that's not really anachronistic. (Ahem, the tumultuous year of 1850 also saw the first National Women's Rights Convention, presided over by Susan B. Anthony.) More to the point, while this isn't a strict re-telling of Hawthorne, it does work as theater.

Much of the play is given a different perspective by an adult version of Hester Prynne's daughter, Pearl (played very sensibly by Rebecca Steer). Ivy Steinberg combines sensuality and strength as Hester, and her petiteness accentuates the character's femininity, though it clashes with the height of her 7-year-old Pearl (an otherwise charming Victoria Perl). Cynthia Caul and Stacey Rosleck, as a pair of local ladies, make an amusing Greek-like chorus.

The men tend to be drawn more coarsely, as in crayon, or maybe Marvel comics: Peter Evans' Chillingworth is more a musky Wolverine than a cagey intellectual. As Dimmesdale, Justin Fortunato does great tormented guilt, but it's more difficult to see how he won Hester.

Mueller's efforts are augmented by inspired lighting by J.R. Shaw, the spare but flexible set by Johnmichael Bohach and the talents of the design team: Paula Parker, costumes; Angela Baughman, sound; and George DeShetler, technical director.

Please, kids, don't consider this a substitute for reading Hawthorne's actual book, which has a somewhat different story and viewpoint. You'll flunk the test, but Prime Stage deserves an "A" for its effort.