Director Tamara Jenkins leaves her audience with a lot to think about.

Tamara Jenkins leaves her audience with a lot to think about in The Savages, the story of a brother and sister forced to find a nursing home for their mentally deteriorating father. They don't really like him very much, and with good reason: He abused them after their mother left. For 20 years now, he's lived in Arizona with a woman whose unexpected death makes the siblings responsible for him.

Jon Savage (Philip Seymour Hoffman), 42, lives in Buffalo, where he teaches drama at a university. He's mired in his big book on Brecht, and his publisher wants a draft. Wendy (Laura Linney), 39, is a New York City temp and aspiring playwright. She's desperate to win a Guggenheim -- key word: desperate -- so she can write her "subversive semi-autobiographical play about childhood." But she fears, in so, so many words, that her project is just a bunch of middle-class, self-important, bourgeois whining -- which, of course, it is.

That should be more than enough to let you know what to expect from The Savages, which employs its Brechtian conceit openly: Dramatic theater, Jon lectures his class, reveals emotion, while Brecht sought to make his audience think and discuss. So Jenkins, who has worked as a performance artist and who attended NYU's graduate film school, whips these theories up into a sort of dramato-intellectual bouillabaisse.

Is The Savages a think piece meant to move us, or a drama meant to make us think? The answer is most decidedly: Yes. It doesn't fully work on either count -- it's neither moving nor profound -- but each element provides some reward.

Would Jenkins be surprised to learn that her most effective moments are the ones that almost seem to matter the least to her project? For example, the siblings visit an upscale nursing home where the guilt-riddled Wendy wants her father (Philip Bosco) to live. "Hey, I take that," she says, proudly, to the woman interviewing them. A moment of bewildered silence. "On your pen. For anxiety." We already know by then that she lives in Wendyworld, but this underscore is concise, startling and sardonically funny. Jenkins seems to know Wendy better than Jon, who's also self-centered, as well as a realist, which helps in situations like theirs. But Wendy's the more compelling of the two to watch: She unravels almost immediately, and then flaps in the wind for two hours.

Jenkins scores her movie with sprightly little pop tunes from the father's era. This may seem ironic, although it mostly just sets us up for the movie's ending, which is as happy as it can be under the circumstances. The problem is that Jon and Wendy don't earn their happiness, unless simply being miserable is payback enough. These two live in a rarified world of cultural privilege, and for the most part, they provoke their own anxieties. (If Jenkins wants us to bleed along with them for the scars left by their parents, she does a terrible job of breaking skin.) The film's most touching moments occur when we see how much the siblings really care for each other; otherwise, you perpetually sense that Jenkins has over-manipulated their issues and their lives.

I must confess that while dramas like this usually absorb me at every level, The Savages seemed a bit off from the start, as if Jenkins had thought too much about it. You can usually tell when a filmmaker is working from experience, but in this case, I can't.

Fortunately, her leading actors are beyond flawless. Linney is always an absorbingly nervous presence, even when her character is vivacious, and this role suits her tightly wound persona. Hoffman, our best screen actor, is a seamless performer regardless of whether the role is realistic (like here) or character (as in Capote). And the leonine Bosco gives a performance that you would normally need to see on stage to experience. Papa Savage is increasingly lost and locked in his own vanishing mind, so Bosco conveys him more with his eyes than his voice. There's a reason he's been acting so famously for so long, and this is it. 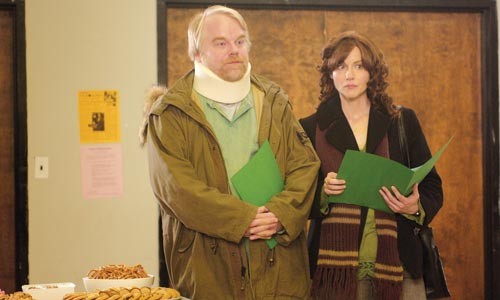