The Rover at CMU Drama

A Restoration comedy gets a modern makeover 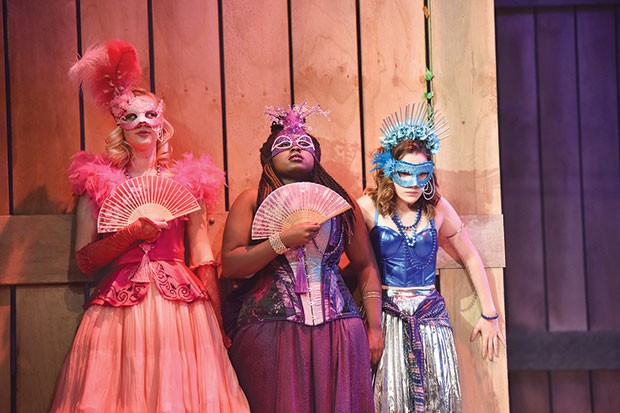 continues through Dec. 3. Philip Chosky Theatre, CMU campus, 5000 Forbes Ave., Oakland. $10-33. 412-268-2407 or drama.cmu.edu
Oh, how Carnegie Mellon University’s School of Drama loves to tease, showing us an austere wooden set — that Samuel Beckett would appreciate — at the opening of its production of The Rover. (If this company ever put on Waiting for Godot, you know the bare tree would blossom neon leaves, and the two vagabonds would be dressed in florescent sharkskin suits). Alas, the naked stage didn’t last long, as we were soon engulfed in CMU’s de rigueur phantasmagoria of sets, costumes and lights.

This 1677 play by Aphra Behn, the first professional female British playwright, is a rollicking Restoration comedy. There really isn’t much of a plot to summarize, other than a bunch of people running around in masks and cross-gender outfits, trying to get laid.

Director David Bond lets each part of his visionary production fight for prominence: the sumptuous costumes by Nina Bova, the monumental scenic design by Caitlin Ayer, and the rich lighting by Olivia LoVerde. But the first two of these evolve out of their respective period modes to the point of ostentation, with the clothing verging on ridiculous. For example, one character goes from wearing 17th-century garb to sporting futuristic gold tennis shoes that would have made L.C. Greenwood jealous.

Andrew Richardson, as Willmore, the sailor, has a wry waggishness that could make him Captain Jack Sparrow’s ancestor, and keeps the audience engaged over the course of a demanding, three-hour show. Victoria Pedretti is dynamic as Hellena, his love interest, who disguises herself as a man, which was contemporaneously referred to as a “breeches role” and considered risqué at the time.

Lea DiMarchi plays the sultry bombshell Angellica Bianca with brio. Hanna Berggren, as Florinda, and Spenser Pollard, as Blunt, also stand out in a strong cast of 16.

Dramaturg Kate Burgess provides an insightful program essay on Aphra Behn, analyzing her proto-feminist role in the Restoration theater, and her impact since.

Perhaps the ethos of the drama is best summarized by Willmore: “There’s no sinner like a young saint.” Behn, also a harbinger, and iconoclast, would certainly appreciate this very modern evocation of her work.