The River at Quantum Theatre 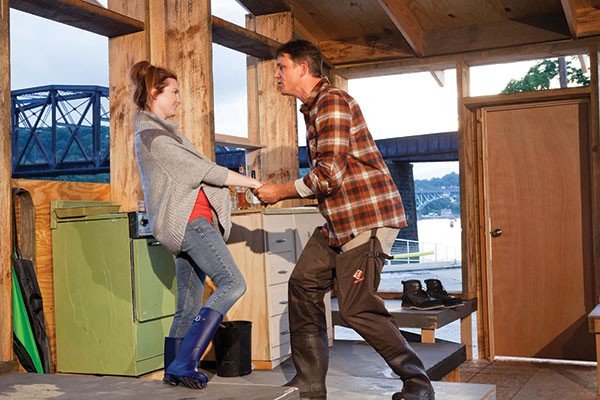 The 2012 British hit’s dialogue has been Americanized, but the feel is still of an English countryside, with references to villages and equally dependable train service and rain. The characters, though finely drawn, remain nameless and ultimately unknowable — as we all are.

Set in a remote cottage, The River sets up an intimacy that is by turns cozy and scary. As the central character, Andrew William Smith easily moves from dominating to charming to vaguely threatening. The Man is concealing something, but it’s not his vulnerability. Opposite him, the bubbly Daina Michelle Griffith and urbane Siovhan Christensen follow eerily similar paths in their respective relationships (games? rituals?) with the Man.

For many of us Pittsburghers, rivers are more than water: They are the city’s lifeblood, and our own. An evening of watching and listening to the rivers can be soothing or contemplative. Quantum’s decision to stage The River beside a real river (the Allegheny) is inspired — yet also what we’ve come to expect from Karla Boos’ innovative company over the past quarter-century. Where do the real environmental sounds of trains and wildlife end, and the stagecraft sounds designed by Steve Shapiro begin?

There are so many layers and word plays in this fish tale: the pursuit, rejection, loss and triumph of fly-fishing mirror the course of romance. The River makes for a completely stimulating evening.

The Hard Problem at Quantum Theatre

4.48 Psychosis at Off the Wall