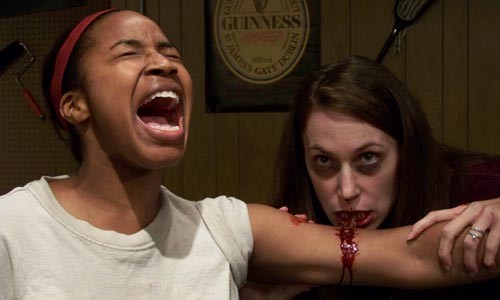 Theater, which is about as far from the real world as you can get, used to acknowledge reality only once a year, with the scheduling of Christmas-themed shows in December. Since I've been on this beat I've noticed it happening to Easter (usually Godspell or Jesus Christ Superstar). And lately, Halloween has been marked for special treatment. This week we'll be seeing Dr. Jekyll and Count Dracula plays, and last week Pittsburgh Playwrights Theatre Co. opened Scott T. Barsotti's zombie story The Revenants.

Zombies have taken over the land, and two couples are hiding out in a suburban basement: Gary and his wife, Molly, and Karen and her husband, Joseph. The twist is that Molly and Joe are zombies chained up by Gary and Karen in hopes a cure will miraculously appear.

To tell you the truth, you couldn't really find two subjects in which I have less interest than zombies and married couples (redundant, surely). But Barsotti manages to make this 90-minute, intermissionless play compelling and intriguing throughout.

He, and his characters, treat "zombie-ism" more as a fatal disease that any sort of otherworldly condition. Consequently, much of this play is two people watching their loved ones slip away from them.

But, in another Barsotti twist, who really loves whom? Nascent love and inchoate jealousy aren't far from the surface, and Barsotti has an unerring ability to follow his story just to the point of theatrical diminishment, and then suddenly switch gears.

Director Mark Whitehead wisely directs with the same matter-of-fact style that informs Barsotti's writing. And even when he does indulge in some Chiller Theater moments, it's quick and low-key. David Conley and Valentina Benrexi have the seemingly simpler roles as the zombies -- but, as is often the case in theater, what they have to do is much harder, and both perform their specific and arduous tasks with commitment and strength.

Makeda Duncan-Parker and Todd E. Betker have the showier roles of the living and angst-filled spouses, and are quite moving playing an impressive range of emotions and intentions.

While I can't say that The Revenants is a great play, I can say that Barsotti (a North Hills native now living in Chicago) has great plays in him. When he writes one of those, people will look back and say you could already see that potential in The Revenants.