The revelatory Carryin' On showcases Teenie Harris' photos of queer nightlife in the mid-century Hill District. 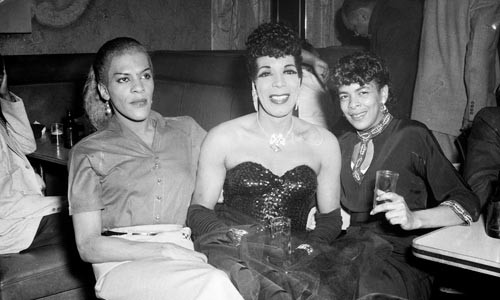 Another side of the Hill: "Three cross dressers in a bar, one in full evening dress with sequined bodice" (ca. 1959), by Charles "Teenie" Harris
The bar is as tight as its occupants: A low ceiling grips close walls enclosing well-worn seats. The tables and chairs don't match, and neither does the glassware. Suits and all-the-frills dresses are the order of the day, but this is no occasion for black ties or diamond necklaces.

There's a modern myth, developed over a decade of mega-clubs and ultra-lounges, that the best of nightlife occurs in vast spaces filled with displays of gaudy affluence. But look into this photograph -- the way its central characters daintily hold their glasses, pausing for the camera, while around them the action continues unabated. This is "going out" the way it once was and ought to be -- full of chaos and class. That the photo features three cross-dressers casually enjoying an evening amongst mixed clientele may not surprise some viewers. That it was taken in Pittsburgh's Hill District in 1959, the height of family-values America, might.

In its glory days of the 1930s through the early 1960s, Charles "Teenie" Harris documented the Hill's every step, from its almost inconceivable cultural effusion to its inhabitants' everyday activities. Somewhere between the two lay the now-buried history of the Hill's teeming queer nightlife scene, centered on a network of clubs such as Little Paris, which commonly featured cross-dressing performers. This scene, too, was documented by Harris, some 50 of whose photos of queer life on the Hill are presented in Carryin' On at The Andy Warhol Museum.

When guest curator Deryck Tines -- a Pittsburgh-based minister, artist, and musician -- first discovered these photos, he was as astonished as anyone. "I was in the Strip District about 10 years ago, and there was a guy selling Teenie Harris [prints] on the street," says Tines. "That's the first time I saw any of these photos or [heard] anything about this history. It was so awesomely beautiful, to see a community so unlike today's community where people are heckled. I knew when I saw the photographs that there had to be something done about them, to celebrate those times, and to confront how we got from there to [where we are today]."

Carryin' On represents the first stage of what for Tines has become a two-year plan to utilize Harris's photos as an artistic focus and catalyst. With $50,000 from an anonymous donor to jump-start the project, Tines curated the current show along with Warhol Director Tom Sokolowski and Louise Lippincott, curator of the Carnegie Museums, owner of the massive Harris archives. For stage two, Tines will seek out local photographers to research and document today's queer scene in Pittsburgh, to create a show of "then and now" photos and information, scheduled to debut next year at Downtown's Space Gallery.

"I want to try to identify the current status of the region and challenge the misconceptions out there," says Tines. "My experience is that people are actually less homophobic than made to appear, and I believe that's particularly true in the African-American community. People are more interested in genuine relationships with people rather than just 'Who do they sleep with?'"

The wonder of Harris's photographs, as always, lies in his thoroughness: From cross-dressers onstage at Little Paris to nude men changing clothes in an unidentified backstage area, it's as though Harris were compelled to document every aspect of life. In doing so, he not only has helped rescue this history from obscurity, but validated it as the "real" Hill District history. Teenie Harris -- who died in 1998 -- has, arguably, invented through his output the Hill District's "Little Harlem" as we know it today. That he implicitly understood the queer club and nightlife scene as an important part of that culture speaks to a kind of everyday integration that seems foreign today.

While clubs such as Little Paris, the Loendi Club and even the famed Crawford Grill weren't necessarily gay-owned or specifically gay clubs, they hosted cross-dressing performers and welcomed a gay audience. In some photos in Carryin' On, in fact, female impersonators are backed up by legends of jazz and R&B, likely after their pay-gigs let out: R&B singer Sonny Hines, legendary drummer Joni Wilson, pianist Roy Hamilton. In one of Tines' favorite photos, a car, bedecked in streamers and toting a huge speaker on its roof, drives slowly along in one of the Hill's annual parades. On the car's hood, two drag queens bear a sign: "Meet Me at Little Paris."

"This isn't a gay parade," says Tines, "it's just a parade in the Hill. It shows that there was a [gay] presence in the Hill on the street. It's one thing to be inside a club, quite another to be out in the street. Teenie Harris was a man of the community and a man of the world, and that's reflected in his work. For me, the fact that he captured [this scene] speaks to it."

Beyond its historical, cultural, even political implications, Carryin' On simply allows us once again to behold the artistry of Teenie Harris. "One Shot," as he was called, snaps with such innately concise composition, such an eye for character and narrative, that each photo in Carryin' On might be a feature film. A man and a cross-dresser lean against a wall next to a jukebox, casually smoking, luring one's thoughts astray; a female impersonator sings, arms raised to the sky; a cross-dresser dances, hunched and joyfully gasping for breath, in a crowded club. And in that way of capturing images -- numbering not in the dozens or hundreds, but in the tens of thousands -- Harris recreated his entire world in photographs. It was a world he so obviously and genuinely loved that he wanted not just to experience it, but to preserve it.

In that way, perhaps, Tines shares something of Harris' spirit -- a belief that artistic representation can shed the inhibitions of history and politics, and get down to something more real. "Art is always larger and more inclusive than anything outside it," says Tines. "It takes you outside the elements of job, school, church -- it's the most powerful vehicle God has given us to bring the message of inclusion and hope and love. [Carryin' On] documents [gay life] in a way people can't comprehend, because we're used to seeing so much craziness -- people having to fight just for their rights."

Such assumed anachronism extends to our very language. In today's politically correct world of "lifestyle choices" and "LGBT," Tines discussed terminology with some remaining veterans of the old Hill District gay scene. "I kept asking people, 'What did you call yourselves?' and they kept telling me, 'We didn't call ourselves anything. We were just carryin' on.'"