The results are in: Here's who's using medical marijuana in Pennsylvania, and why | News | Pittsburgh | Pittsburgh City Paper

Pennsylvania's medical marijuana has been operating for almost two years, with new patients joining every day. Last month, the Pennsylvania Department of Health said the state had 153,000 patients, up from 70,000 in January 2019.

A new survey from Compassionate Certification Centers shows who those patients are, why they are using medical marijuana, and how they have rated Pennsylvania’s program so far.

Pennsylvania has 23 qualifying conditions that are applicable to the state’s medical marijuana program. According to the survey, the two most commonly cited conditions were chronic pain and Post Traumatic Stress Disorder (PTSD). About 37% of patients use marijuana to treat chronic pain and 24% use it to treat PTSD. Opioid-use disorder was a distant third, with about 12% of Pennsylvania's medical marijuana patients.

The survey was offered to 17,000 patients and received more than 2,000 replies. Surveys were taken from a two-month period in late 2019 and released through CannaBot, an app used by medical marijuana patients. Anxiety was added to the list of qualifying conditions on July 20, 2019, but it did not appear in the survey answers. 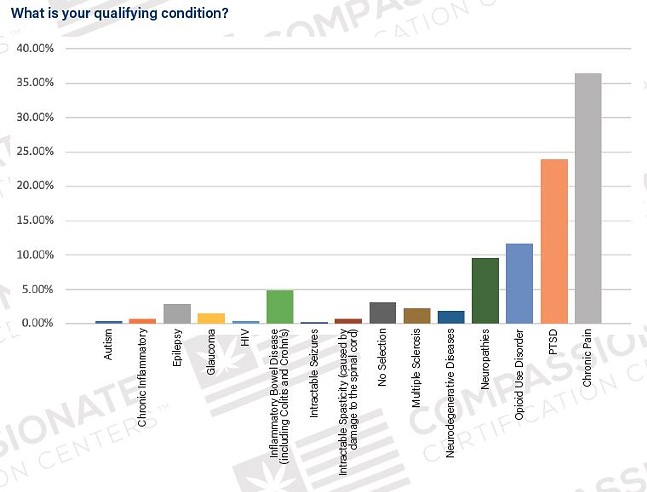 Preferred methods of ingesting medical cannabis were about 46 percent oral (pills, etc) and about 44% inhalation and vaping. Patients also appear to be taking medication throughout the day. More than 41% of users use medical marijuana 2-5 times a day, and more than 15% take medication 5-10 times a day. About 37% use marijuana just twice a day. More than 39% use the recommended dose of the pharmacist.

The survey appears to confirm what some dispensaries have been saying about a supply shortage of marijuana products. Only about 20 percent say the dispensary had the product they wanted in stock, compared to 39% saying dispensaries usually had their preferred product, and 35% saying sometimes, and about 4% saying never. 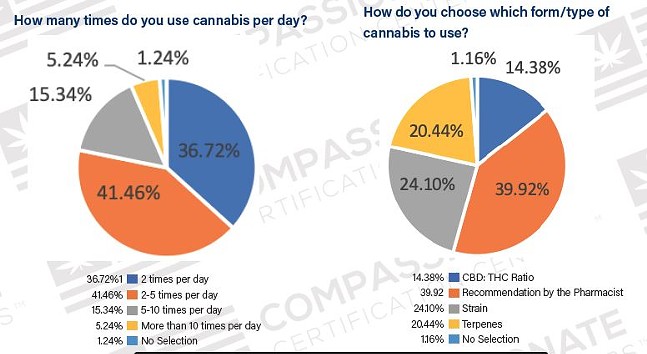 “The goal of this retrospective Pennsylvania patient data collection analysis was to gather information, from a patient-based perspective, regarding the Pennsylvania State Medical Marijuana program from its inception through late 2019,” reads the study. “This information and data, provided directly by the patients the state medical marijuana program is serving, is paramount to the programs continued success and growth.”

The full paper is shown below.