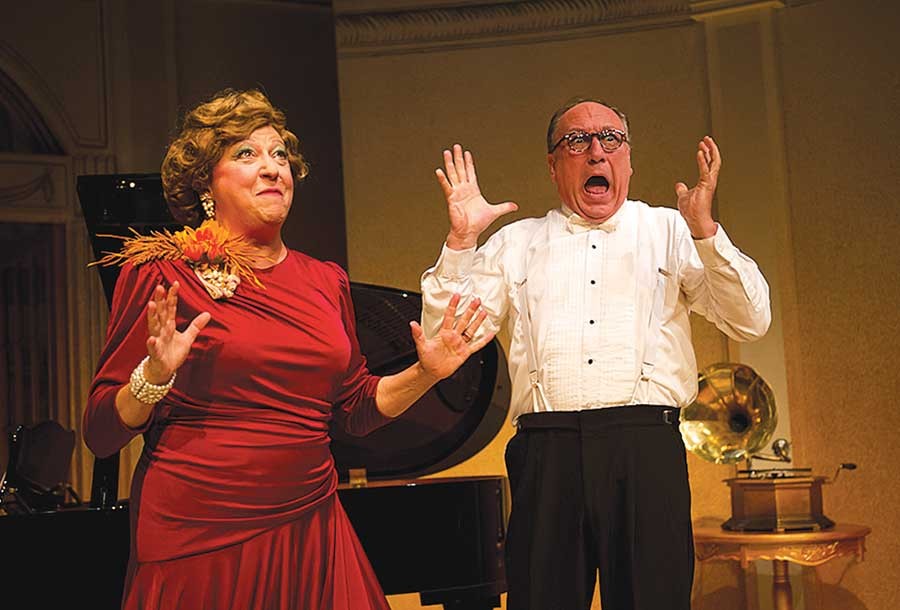 Souvenir is the natural end of the revue style of musical popularized by Mamma Mia and Rock of Ages, taking as its source music a fusion of European opera and dance-hall jazz. But this story about a phenomenally bad singer is something more special than a musical.

The narrator of this 2006 comedy by Stephen Temperley, now at The REP in a production directed by Tomé Cousin, is Cosme McMoon. During the jazz age, he was a twentysomething pianist in New York; now he's looking back from decades in the future.

But the show's centerpiece is Florence Foster Jenkins, played by Jill Keating as a wealthy, dotty socialite who hires Cosme to accompany her recitals. The punchline: Jenkins is completely, utterly tone-deaf and actively resists the idea of tempo as emotionally sterile. I suppose that's not the punchline on its own; every note she sings wrings that same gag, and it never runs dry.

Crucially, like anything so-bad-it's-good that's worth your time (such as the prose of Amanda McKittrick Ros), there's an element of sincerity. Florence Foster Jenkins was a real human (whose birth name, at least according to Wikipedia, was Narcissa) who really was astonishingly bad at singing and who made it to Carnegie Hall on the strength of irony and her pianist, Cosme. Many of the vocal peculiarities on exhibit are straight from surviving recordings, and Keating is to be commended for making such bad sounds so charming.

Meanwhile, it's extremely impressive to see Jeff Howell bounce between McMoon's detached, latter-day Noel Coward persona and youthfully exuberant straight man (in the comedic sense, anyway) — while playing piano for nearly half of the show. Howell's character shifts are always smooth and agreeable.

Souvenir, however, is more than simply another show for people who've run out of friends to introduce to The Room or Plan 9 From Outer Space, or who've memorized every episode of Mystery Science Theater 3000. It's also about the voyeuristic confusion that makes outsider artists like, say, David Liebe Hart, so fascinating. If you ever feel guilty about laughing at people who try and try and just can't make it, this is as close to a respectful gawk as I've seen.