The REP's By the Way, Meet Vera Stark

The first act is certainly one of the funniest I've ever seen on stage. 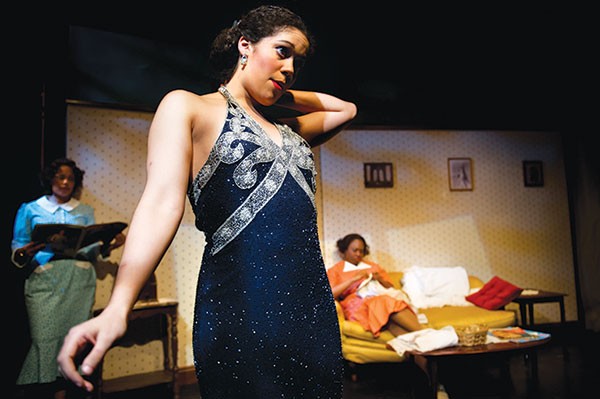 Photo courtesy of Jeff Swensen
Corinee Scott in The REP's By the Way, Meet Vera Stark

BY THE WAY, MEET VERA STARK

Playwright Lynn Nottage burst onto the theater scene in 2003 with Intimate Apparel and won a Pulitzer in 2008, for Ruined. Her latest play, By the Way, Meet Vera Stark, premieres locally at The REP.

It's 1933 in Hollywood, and Vera is a former vaudeville performer on the "colored" circuit. She came west to try her luck in pictures, but ended up a maid to Hollywood star Gloria Mitchell. One night, Mitchell throws a party for the producer and director of The Belle of New Orleans, a Civil War epic featuring a role that Vera, in the room serving the drinks, wants to play. Also there as "hired help" is Vera's roommate Lottie, who's hoping for a role as well.

With enormous energy and an outrageous sensibility, Nottage sets all these characters up against each other in a first act that is certainly one of the funniest I've ever seen on stage.

Director Tomé Cousin does a great job ratcheting up the insanity to the breaking point. Maria Becoates-Bey, as Vera, is the calm, determined center continually reminding us what's at stake. Lottie is the scene-stealing comic relief, and Bria Walker is side-splittingly funny in the role.

But the bill for all these shenanigans is presented in Act II. Vera ends up with a four-decade show-biz career which is inextricably linked to the changes happening for African Americans in the 20th century. It's a subject about which Nottage cares deeply, and she's written a lecture about it.

She tries hard to hide that it's a lecture, and is ingenious in the attempt. The second act takes place in 2003, at an academic conference where a bunch of talking heads on stage left watch and comment on a recently discovered clip of Vera's final TV appearance, in 1973, acted out on stage right. The talking heads are quirky, the '70s fashions are funny and this cast goes at it full-tilt, but you are constantly aware that Nottage the dramatist has given way to Nottage the thinker and theorist.

From the dizzying heights of the first act, Vera Stark lands with a dull thud in the second ... but oh, that first act.