Mira Nair's adaptation of the popular novel is well-intentioned, if a bit heavy-handed 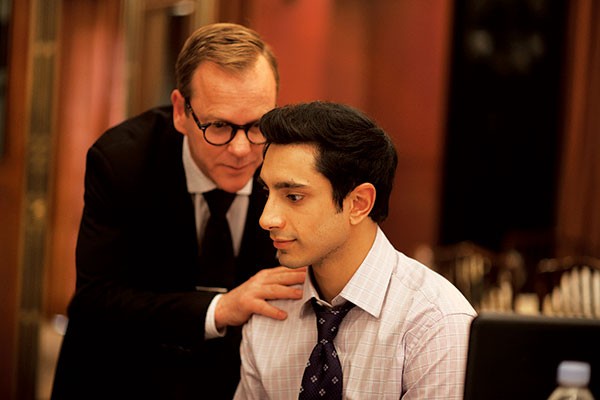 In English, and Urdu, with subtitles.

How seemingly ordinary people turn to espousing and acting on extreme views is the investigation of The Reluctant Fundamentalist, adapted from Mohsin Hamid's novel and directed by Mira Nair (The Namesake). But its protagonist, a possibly radicalized young Pakistani professor named Changez (an engaging Riz Ahmed), cautions upfront: "The answer to that question may challenge some of your preconceived notions."

It's 2011, and Changez is speaking to an American reporter named Bobby Lincoln (Liev Schreiber); the two are in a Pakistani tea shop, as tensions are ratcheting up over a kidnapped Westerner. Lincoln worries that Changez may be part of "Pakistan's new militant academia," but Changez professes to be "a lover of America."

The film then jumps back to 2001, when, after graduating from Princeton, Changez is hired as a financial analyst at a prestigious Manhattan firm. Under the tutelage of his mentor (Kiefer Sutherland), he rises quickly, adapting easily to the firm's brutally executed capitalism.

Then comes Sept. 11, and from within and without, things begin to change. Changez suffers racial profiling, and finds his relationships with his American girlfriend and to his job increasingly challenging his sense of self.

So he returns to Lahore, a different man, and in 2011, he is explaining his transformation to a reporter. But all is not as it seems, and people are not necessarily who we assume they are. And once we know who they actually are, isn't how they arrived there, and what internal and external forces drove that journey, relevant information? "I picked a side," says Lincoln, who has his own history to relate. "It was picked for me," counters Changez.

Most of the film employs a bifurcated narrative — the conversation at the tea shop intercut with flashbacks chronicling Changez's life, until the unsatisfying final reel opts for a garbled action sequence. It's structured as a literal dialogue, between representatives of the two mutually misunderstood cultures of the United States and Pakistan. It's also a side-by-side examination of the perils of fundamentalism, be it religious or economic; both can be destructive, even as their adherents brandish supporting ideology.

The film is mildly provocative, though its message about false assumptions and the various shades of gray that make up human interactions isn't newly illuminating. As befits its title, The Reluctant Fundamentalist is meant to forefront ambiguity, but the film's sympathies and themes are quite straightforward and even heavy-handed. (Some of the dialogue is a little too on the nose, with lines that likely come off better in print than spoken aloud.) But as real-life events continue to remind us, it's a conversation, even if imperfectly delivered, that bears repeating.