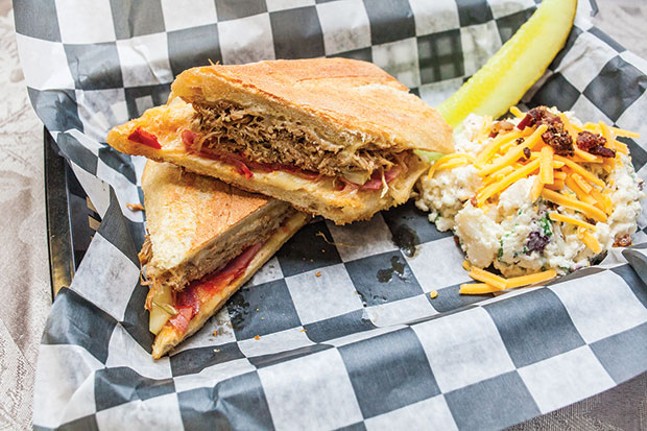 CP photo by Vanessa Song
Cuban sandwich, with a side of loaded potato salad

It seems no longer necessary to state that Pittsburgh’s restaurant scene is exploding, resulting in an embarrassment of dining riches. What we do think it important to discuss is how this is happening. Increasingly, we see a bifurcation of the market: At one end are walk-in, fast-casual franchises serving predictable choices at low prices, regarded by students and lunch-hour diners as healthier and tastier than fast food. At the other are aspiring Michelin-star recipients. Certainly, some exciting things are happening at the high end of the market, but a seat at this table comes at a price that is hardly accessible to all.

It’s the middle we’re worried about, the casual, affordable sit-down meal. The proliferation of gastropubs was exciting at first, but one soon began to blur into another in the dim light of Edison bulbs. Not that the food isn’t good — much of it is. But the disappearance of traditional types of mid-range dining results in a dearth of real options between grab-and-go and blow-the-budget.

Take the humble sandwich counter. Once a staple of downtowns and small towns, its tiny format encouraged friendly chit-chat of the type that nourished community bonds as well as hungry patrons. Fast food killed the sandwich counter long before the advent of the gastropub, and it hasn’t come back.

Until now. You might think such a retro concept would re-emerge in Lawrenceville or some other hip enclave, but RedWood Café is in Mount Lebanon, where suburban culture meets urban form. The name is an homage to the finest restaurant of chef-owner Frank Tokach’s hometown, Donora, in its heyday, but Tokach has fitted his ambitions to his space. His brief breakfast and lunch menus and take-out dinner offer quality of conception over quantity of variation.

At the core of the lunch menu are just over a half-dozen tantalizing sandwiches, augmented by a couple soups, a daily quiche, mac-and-cheese and salad. The sandwiches run the gamut from grilled American cheese on housemade Pullman bread to crab cake on brioche. The brilliance of a good sandwich shop is that the kitchen can offer variety without stretching too thin: Seven sandwiches represent at least three distinct cuisines, but for all, the mastery of technique amounts to good prep and great ingredients.

Take the crab cake. Many include so much breading that a bun is redundant; others are so lightly bound that they fall apart when lifted. But RedWood’s found the perfect balance, well bound yet light, saline, succulent and deliciously accented by a tangy lemon-mustard aioli. The softness of the brioche bun was also an ideal match for the tender patty.

The Cubano looked fairly standard on the menu, with innovation limited to Dijon in place of yellow mustard and capicola for the ham. But the sandwich itself had even more going for it. Mojo pork lived up to its name: Where Americans will often use ordinary roast pork for their Cubans, RedWood chose savory, richly flavored shredded pork that would make a fine sandwich on its own. Better, in place of a few bread-and-butter pickles, there were what seemed more like Italian giardinera; the kick from this was a welcome component to the big flavors in this finely pressed sandwich.

Sandwiches come with a side of “loaded” potato salad, another flavor-packed item. A chunky, classic version of creamy potato salad was augmented by sharp shredded cheddar and smoky crumbled bacon for an effect that evoked a loaded baked potato.

In contrast, mac-and-cheese was perfectly simple: elbows in a super-creamy sauce that was thin and mild, but with unmistakable real-cheese flavor.

The build-your-own salad option was closer to a limited salad bar than the comprehensive offerings at fast-casual places: spring mix or romaine, balsamic or ranch, and then almost a dozen toppings ranging from classic cucumber and tomato to meal-making garbanzos and eggplant. Adding one or more proteins can turn your salad into a complete entrée for a little more cost, but we liked that even the basic bowl — and it’s a big one — can make either a substantial lunch for one, or a side for two.

Housemade macaroons comprise the only regular dessert. Their crispy-chewy, coconutty goodness was indulgent without busting our full bellies. Most days, a couple of to-go dinner entrees are available as well, and Tokach offers occasional prix fixe meals where he stretches his culinary muscles.

Straightforward but surprising, familiar but not ordinary, RedWood Café shows that middle-of-the-road dining can be anything but mediocre.