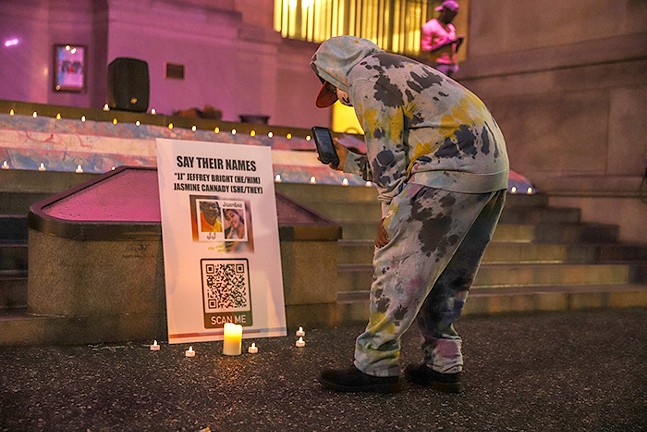 CP Photo: Kaycee Orwig
Trans YOUniting held a candlelight vigil on Sun., Feb. 28 outside the City County Building to honor four lives that were lost in the past two weeks.
Four trans people of color have died in Western Pennsylvania in February, three of whom were killed within one week. Chyna Carrillo was killed in Lawrence County, an hour north of Pittsburgh, on Feb. 18, and siblings Jasmine Cannady and Jeffrey “JJ” Bright were killed in Ambridge, just 30 minutes from the city, on Feb. 22. Audura Belle also died earlier this month due to lack of health care, according to statements from her friends and family.

Carrillo and Belle were trans women; Bright was a 16-year-old trans man; and Cannady was nonbinary, which falls under the umbrella of trans identities.

The victims who died in February are part of a larger and likely increasing trend of violence, both individual and systemic, against trans people in the United States. But they are more than statistics or trends. They are people whose lives have been cut short and who are still loved and missed.

Carrillo was allegedly killed by Juan Carter Hernandez, whom she had recently started dating. She was one of 25 grandchildren in her family, and as a child, she loved playing with her cousins and particularly enjoyed playing dress up and dolls with her female cousins.

Carrillo’s aunt, Mayra Carrillo, says her family understood gender as seeing “blue or pink,” but they loved and supported and wanted to protect Carrillo. Mayra says loving her also allowed the family to learn more about gender, loving unconditionally, and being their most authentic selves, and the family continues to carry and share those lessons with the people they meet. 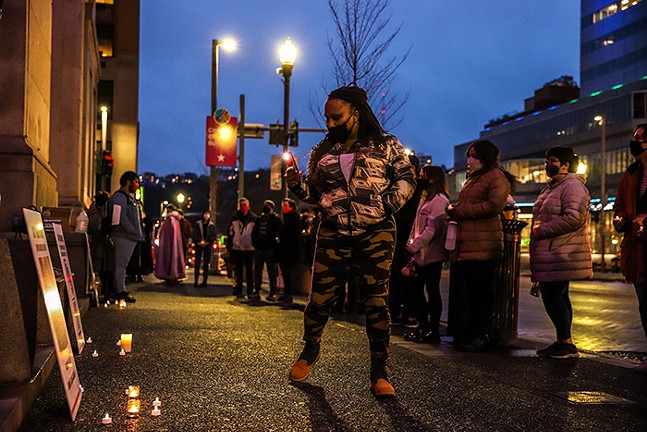 CP Photo: Kaycee Orwig
Trans YOUniting's candlelight vigil in honor of the four lives lost in the past two weeks
“Most of us are just like, ‘I don't know if people can take it,’ and she was like, ‘Well, ready or not, this is who I am,’” Mayra says. “Those are some of the best things about my niece that, you know, not only does she inspire other people to do it, she inspires all of us to be our most authentic self. And to love yourself no matter what.”

The rate of violence against trans people in 2020 was higher than that of any year prior since the national LGBTQ advocacy group Human Rights Campaign began tracking data in 2013. While at least 44 trans people were violently killed in 2020, the number of recorded deaths in 2021 is already past that rate of deaths. At least nine trans people have been killed throughout the country in 2021.

The string of deaths in Western Pennsylvania refocuses attention on the lack of civil rights protections for LGBTQ individuals in many parts of the region, not to mention the accessibility problems trans people encounter in health care and other social services. It’s another tragic reminder of just how far the movement to protect trans individuals must go before equality is reached.

Carrillo grew up in Springdale, Ark. with her family, and attended Springdale High School before becoming a certified nursing assistant at a local college. She had moved to New Wilmington early in the pandemic and was working there as a CNA because she wanted a fresh start, although she still came back to Springdale to visit her family.

“She always was herself,” says Mayra of her niece. When Chyna was three years old, her cousins asked about her gender, and according to Mayra, Chyna told them, “Whenever I was in my mommy's belly, I was a little girl. And then I was born, and I don't know what happened.”

Photo provided by Mayra Carrillo
Chyna Carrillo and her family
One of Mayra’s favorite memories of Chyna was on a family vacation to Destin, Fla. Mayra was driving the family van, and Chyna was her co-pilot, and they talked and shared secrets during the drive. One night on the beach, Mayra and Chyna were sitting in a natural pool in the ocean, pretending to be mermaids, but just after they decided to stay in the pool a little longer, Mayra was stung by a jellyfish.

Cannady and Bright, both of Ambridge, were allegedly killed by their mother. According to the Pittsburgh Lesbian Correspondents’ blog, Bright had been an active part of Beaver County’s LGBTQ advocacy community and had participated in the county’s nonprofit LGBTQ youth organization PRISM for many years. Pittsburgh Lesbian Correspondents reports that his older sister Cannady identified as nonbinary and sometimes accompanied him to gatherings. PRISM staff described them as a “sweet, shy, and artistic soul.”

Belle’s death underscores not only the need for trans-inclusive and trans-sensitive health care for all, but also the ways in which violence against trans people extends beyond physical attacks. Her death has also left her family hurting for losing her so quickly. Her cousin, who created the Facebook fundraiser to cover her burial and memorial costs, describes Belle as a “[v]ery loving bright artistic amazing individual.”

Neither New Wilmington, the Lawrence County town where Carrillo was killed, nor Ambridge, where Cannady and Bright were killed, has nondiscrimination protections for gender identity or sexual orientation, and the U.S. still has many problems providing all of its residents access to affordable health care. The systemic problems that trans people face require collective solutions, and local LGTBQ organizations such as Trans YOUniting, SisTers PGH, and PRISM respond to such challenges by providing material and emotional support for trans communities.

SisTers PGH held a vigil on Feb. 21 for Carrillo and wrote press releases for Carrillo, Cannady, and Bright. PRISM held a vigil for Cannady and Bright on Feb. 23 and amplified a GoFundMe for the siblings on their Facebook page. Trans YOUniting held a candlelight vigil for Carrillo, Cannady, Bright, and Belle on Feb. 28 at the City County Building in Downtown Pittsburgh, and they amplified a fundraiser for Belle’s burial costs on their Facebook page. Both organizations are Black trans-led and offer aid and support with housing, education, and youth mentorship.

“Love us while we are here,” founder and executive director of Trans YOUniting Dena Stanely wrote in a press release. “This should make everyone outraged.” 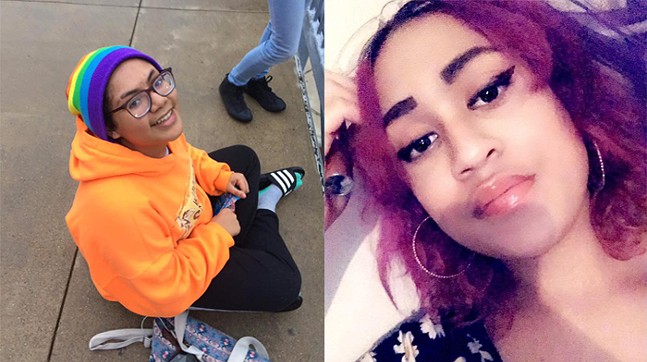 “The [Trump] administration was attempting to erase us,” says Cooper. “And I think without question that creeped into a psyche of the American public as well, that trans people are not worthy of protection, and that we can simply be erased and unfortunately … right now, what we're seeing with violence is actually erasure by killing us.”

Trans people have been forced to contend with both explicit anti-trans violence, as well as their gender identities affecting social determinants of health, such as access to transgender-competent health care, stable housing, education, and employment. According to the National Institutes of Health, collecting data on trans violence is also made difficult for organizations such as the Human Rights Campaign due to misreporting, misgendering, or “deadnaming” (referring to someone by the name they used before they transitioned) individuals who have been harmed.

These violent acts are compounded for trans people with intersecting marginalized identities, especially for trans women of color who experience racism and misogyny in addition to transphobia. The National Center for Transgender Equality’s U.S. Transgender Survey found that the nearly 28,000 trans people surveyed were more than twice as likely as the U.S. population to be living in poverty, but people of color were more than three times as likely to be living in poverty. 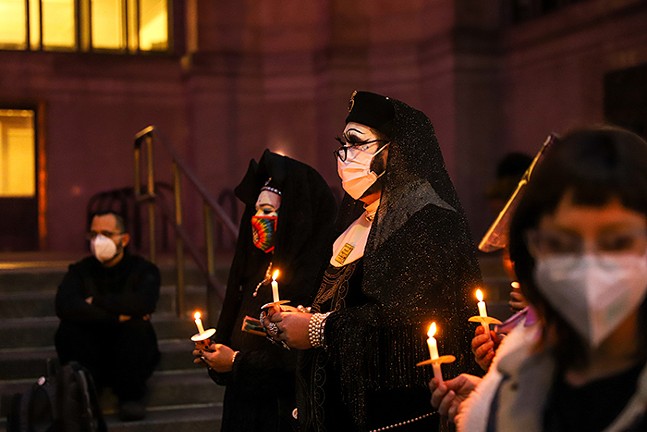 CP Photo: Kaycee Orwig
Trans YOUniting's candlelight vigil in honor of the four lives lost in the past two weeks
Trans women of color were also more likely to be physically attacked because of being transgender compared to nonbinary people and transgender men. While the exact effect being trans has on life expectancy in the United States is unclear, an FBI report on hate crimes showed a rise in gender-based hate crimes from 2.2% in 2018 to 2.7% in 2019.

“Violence, before it comes to your hands, it goes through your head and often comes out of your mouth,” Cooper says. “Because if you don't think of trans people as real people, and you think of them as disposable, and worthy of disdain, then killing them doesn't seem so far fetched.”

Cooper also believes education, as well as strengthening and enforcing hate crime legislation, are necessary to reduce violence against trans people. Through education, people can prevent the dehumanization of trans people that allows violent thoughts and speech to flourish. Cooper says hate crime legislation will also make it “uncomfortable for people to discriminate against trans people … Education is good, but you have to actually put some movement and some action behind that.”