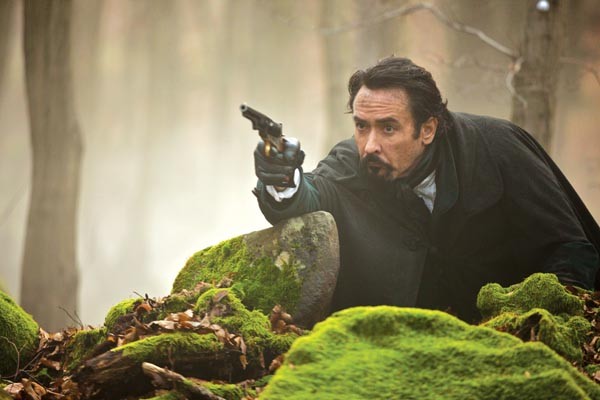 Deep into that darkness peering / long I stood there wondering, fearing...

Like the tormented narrator of Edgar Allan Poe's poem "The Raven," I too waited anxiously in a darkened room as the screen barely brightened with The Raven, James McTeigue's cinematic imagining of Poe's harrowing last days. But alas, the film proved to be a big splat of gothic bird poop — an insult to Poe, detective thrillers, my intelligence and even the titular black bird, who only appears in pointless cameos.

The film opens by informing us that, in 1849, Edgar Allan Poe was found gravely ill on a Baltimore park bench, with the details of how he spent the preceding days unknown. Now you're about to see those days of mystery unfold! (Later in the film, you'll note that Poe's final days take place in the company of many, including cops and reporters. So what's the "mystery"?)

Somebody is committing a series of gruesome murders in the manner of Poe's stories (the locked room of the "Rue Morgue," the swinging death of "Pit and the Pendulum"). Thus, a police detective (Luke Evans) enlists Poe's help, not least because the killer is leaving messages specifically for the writer, and has the temerity to kidnap Poe's beloved.

I don't know why John Cusack was cast as the alcohol-, drug- and depression-ravaged Poe, but it's a dark and tattered cloak that just doesn't fit the still-puppyish actor. The Raven's chief mistake, though, is taking itself seriously as a crime thriller. With less action and cop-shop chatter, maybe The Raven could have been a broody, disturbing horror story. Conversely, it could have embraced the camp aspect — Poe dotes on a pet raccoon — and had more fun. (Fun watching people be disemboweled, you ask? See 1973's Theatre of Blood, which offered almost the exact same plot but with the works of Shakespeare, and which is a non-stop gruesome delight—– an A-grade B-film.)

Instead, we slog through the preposterous and poorly developed plot, as Cusack flaps about unconvincingly as a depraved soul and the police hurtle through forensic clues like CSI: 19th-Century Baltimore.

In the truly dreadful last reel, The Raven makes a feeble stab at being po-mo. "I feel I've become a character in one of my tales," opines Poe. You don't say? Even our villain — who is forced to recount his incomprehensible motives in a monologue — gets a bit meta, apologizing for "a rather disappointing denouement." This late acknowledgment of how Poe's distinctive and influential work has been bastardized into megaplex dreck doesn't excuse The Raven. And if that poor bird could talk, you know what it would say.