The Railyard Tap Room, in Bridgeville, makes a good stop for inventive pub fare and plenty of beer

Scattered among the poutine, Scotch eggs, wings and burgers were a selection of Indian items 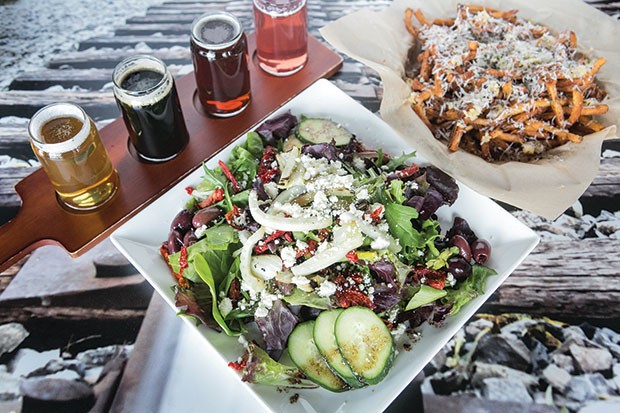 True to its name, Railyard Tap Room is located right across Railroad Street from the tracks in Bridgeville, just down the block from the historic train station on, yes, Station Street. The building has been radically remodeled from an old Tambellini’s, so that instead of something vaguely Tuscan, here is something vaguely Old West, or at least rustic, with shades of trendy gray and barn wood. But it’s pulled together with some rather sharp graphic design, including a Photoshopped rail-crossing sign that was blown up and applied to the table tops.

Despite these efforts to tie the decor to the name and location, Railyard is not exactly a theme restaurant, but a — mostly — straightforward bar and dining room with plenty of TVs and a truly impressive array of beverages on tap. The most remarkable thing about the interior was perhaps the double-height space in back of the bar with billboard-size photo-murals of PNC Park and other venues. For South Hills suburbanites loathe to drive into the city for a game, this must be the place to be.

But back to our earlier suggestion that Railyard is not altogether a typical tavern. Scattered among the poutine, Scotch eggs, wings and burgers were a selection of Indian items, some imported whole (Mulligatawny soup) and others hybridized with contemporary pub cuisine (chicken tikka tacos). According to our friendly server, one of the owners is Indian and suggested adding the dishes on a hunch (correctly, as far as we are concerned) that diners would appreciate such unusual offerings.

Beyond that, Railyard’s menu impressed us with its refined touches (demi-glace in the poutine), use of beer in the kitchen (stout BBQ wings), specially sourced ingredients (Serenity Hill bacon) and a specials menu featuring more ambitious entrée options (steelhead trout with butternut squash and an Indian-spiced roasted chicken on the night we were there).

The aforementioned poutine included a fried egg, which sounded delicious but was perhaps a bit too filling as a starter. Instead, we chose the bacon-fat fries. The flavor was clean, not overwhelmed by smoke, and the texture of the shoestring-style fries was impeccable, crispy but not crunchy and with softer edges as well. Lardons — cubes — of bacon added chew and meaty punch, while plentiful slivered scallion brightened the starchy, salty notes and added its own texture. This was a promising start.

Angelique went with a triple play from India for her meal: Mulligatawny soup (a personal favorite that is, truth be told, rarely seen on Indian restaurant menus, let alone in gastropubs), veggie samosas from the specials menu, and chicken tikka tacos. The soup was thick, stew-like, and substantial, with the earthy notes of lentils and root vegetables balanced against warm spices such as cinnamon, cumin and coriander. Did we also detect the bittersweetness of fenugreek and the pepperiness of garam masala? Whatever it was, this soup epitomized the crucial distinction between seasoned (which it was) and spicy (which it wasn’t).

As for the chicken tikka tacos, just one question: Why has no one thought of this before? The concept is brilliant. Tender morsels of grilled chicken — coated, not drowned, in a mild tomato-yogurt-curry sauce — were folded into a flour tortilla (not unlike Indian naan) with fresh tomatoes, grilled scallion, baby bitter greens and cucumber raita standing in for sour cream. The tortillas had a bit of a tough texture, but other than that, this dish was a cross-cultural revelation.

An order of wings made for a split verdict. The meat was merely OK, not as plump and juicy as we’d hope. But the sauce — sweet and spicy BBQ made with cider — happily delivered much more spice than sweetness, invigorating rather than condescending to our palates.

The grilled-apple burger combined smoked cheddar with grilled slices of lemon-honey-infused apple. Those flavors are arguably too subtle for a nicely charred half-pound burger, but there’s no question that they made a difference, augmenting the sweetness of the apple without swerving the sandwich into fruitburger territory. The apple had a nice texture, too, softened but not mushified by the heat, and the smoked cheese reinforced the grilled flavor while evoking Southern apple pie with cheddar on top. It was a clever recipe, well executed.

Railyard Grill’s Indian accent may be its most distinctive offering, but hardly the only one that charmed. Almost without exception, the food was delicious, and the menu, while fairly brief, had both depth and breadth. The vegetarian options were far better than most; we might return just to try the housemade veggie burger. Bridgeville is fortunate to have something special down by the railroad tracks.

The 46th Pittsburgh Record and CD Convention takes place at the Bridgeville VFD, Sat., May 26

The Colombian Spot, on the South Side, offers the fare of this South American country