An old-fashioned but stirring drama about war and remembrance 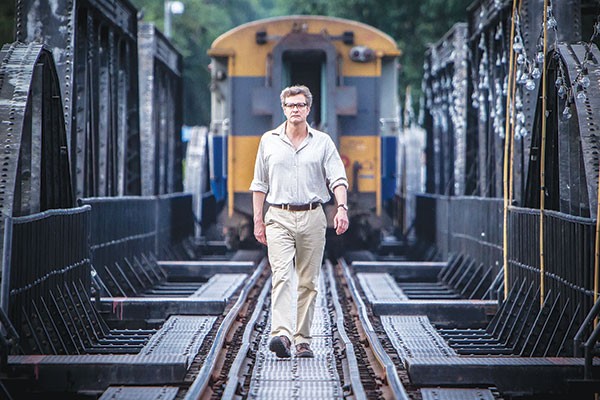 Some parts of war are a tragedy, and some parts are a crime. That's one of the several good ideas raised in The Railway Man, a stirring drama that demonstrates how stories told many times can be told well again if you just keep it clear and simple.

The Railway Man comes from Australia, the home of its director Jonathan Teplitzky and one of its stars (Nicole Kidman), but it has nothing to do with Australian history. It's about imperialism: by the British in Singapore, which defeated its colonizers in 1942, and then by the Japanese, who captured the defeated British soldiers and imprisoned them in Thailand, forcing them to build a trans-national railroad under merciless conditions.

So yes, this is The Bridge on the River Kwai, David Lean's 1957 classic, retold through the experience of Eric Lomax, a British veteran of World War II, who lived through it and wrote a book about it.

The drama begins in 1980, when the mature Lomax (Colin Firth), a railroad enthusiast, falls in love with Patti (a tranquil Kidman), whom he meets on a train. He won't tell her about parts of his wartime past, which he continues to relive through nightmares and flashbacks, so she asks his old Army buddy (Stellan Skarsgård) to tell her what so thoroughly traumatized him. The story then flashes back to scenes of internment and torture (Jeremy Irvine is fine as the young Eric), finally moving forward when Lomax tracks down the Japanese translator — as young as Eric was at the time — who watched as it happened.

In a way, I prefer the middle story of Railway Man to the ones that surround it. Firth is superb as an everyday fellow who can't overcome the memories of his unspeakable past, not even for the love of a woman who quietly yet desperately wants to rescue him. But the war story is agonizing, and the confrontations between the elder Lomax and his captor, though toeing the line of melodrama, are naked with emotions that few of us can fathom.

This all makes for a very old-fashioned movie, albeit one more violent than the times permitted Lean in the 1950s. Along the way, we're asked to consider why we fight, and how we can put our humanity aside to do it. It's an old story that — in more ways than one — never seems to go out of style.