A sequel to the 2011 hit delivers plenty of martial-arts fighting, and some clunky plot 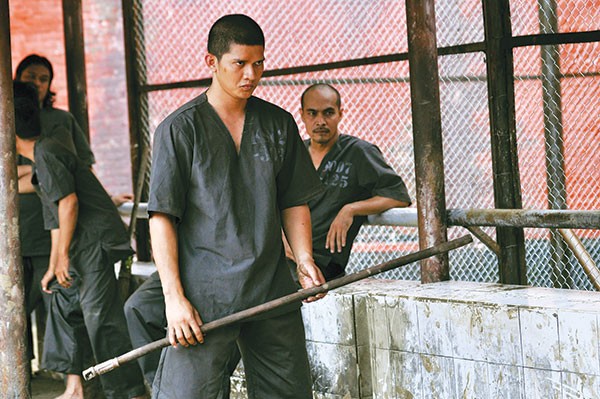 It's about to get real: Rama (Iko Uwais) and a broom handle

In Indonesian and Japanese, with subtitles.

The Raid 2, the sequel to the ultraviolent 2001 Indonesian mixed-martial-arts hit The Raid: Redemption, opens rather pastorally, as the camera hovers above a dirt road in a green field. But when a car pulls up, you notice the human-sized hole dug in the road, and sure enough, the pleading guy with the bag over his head is summarily dispatched into it via a headshot.

The message the killer delivers — a warning about "ambition and limitation" — will resonate throughout writer-director Gareth Evans' film. The earlier Raid had a rather straightforward set-up designed to maximize the skills of its martial-arts star and Evans' gift for shooting intimate fight scenes in complicated spaces: Young cop Rama (Iko Uwais) has to fight his way through a grubby Jakarta high-rise to vanquish a gangster.

Raid 2 has a lot more plot, all of it reminiscent (if not derivative) of scores of crime thrillers. Here, Rama (Uwais, again) goes deep undercover, joining a prominent gang just as one ambitious member is breaking a long-standing truce and causing a three-way gang war.

Let's face it: Viewers are coming for the action scenes, and they are plentiful and appropriately "balletic." All involve hand-to-foot martial arts, but supplementary weapons are encouraged: knives, heavy objects, guns. Tapping Evans' penchant for shooting action in teeny-tiny spaces, the first brawl takes place in a toilet cubicle, and the film's showpiece is a five-man fight in a speeding car, which is also being shot at and rammed by other vehicles.

The violence is bloody and graphic, if inventive: A man pulls a knife out of his own back and uses it stab another guy's leg; a man gets his face stir-fried; and one woman can do a lot of damage with two hammers. But Evans' has an eye and ear for better-than-average style — the sound of a metal baseball bat dragging on concrete is nerve-tingling — and the fighting is shot without visual gimmicks. If you're a fan of martial-arts films, can stomach the garroting and don't mind a choppy plot, then get your Raid 2 on.