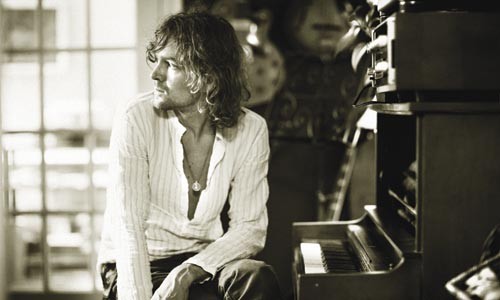 "Looking for what he's looking for": Brendan Benson

For better or worse, Brendan Benson remains a cult favorite. Over 15 years, he's released only four solo discs, each to great reviews and generally tepid sales. Last year's My Old Familiar Friend, however, nearly cracked the Billboard Top 100, perhaps partly due to his role in The Raconteurs, where he co-writes with Jack White.

But Benson's solo work isn't an acquired taste -- his songs are inveterately catchy and informed by classic pop, with sumptuous melodies brought to life by cooing background vocals and subtle instrumental details.

"It's the smallest things that make a difference," Benson says, via phone from his Nashville home. "Like the kick-drum pattern. Things that you don't notice typically as a listener. You don't care what the wood block's doing, but it's in there. It's speaking to you and you might not even know it."

Lyrically, his songs bubble with sly whimsy and coy intelligence. He's reminiscent of a less biting, more inwardly directed Elvis Costello, whether describing lovelorn confusion as "looking for what he's looking for," or watching as "the world takes shape in streaks of color and fields of rape" (a yellow flower used in canola).

Benson's a wonderful talent on his own, but enjoys working with other songwriters, like Jason Falkner and Ashley Monroe. He recently released a seven-inch, "Spray Tan" / "Two Birds," with Raconteurs touring member Mark Watrous.

"I have fun playing by myself. It's a different thing, though," Benson says. "Playing with other people is ... more fulfilling, gratifying and rewarding. And it's easier. I'm convinced it's the way rock music was meant to be done."