You'll need advance preparation if you're interested in understanding Normand Chaurette's 1993 play The Queens, presented by The Rep at Pittsburgh Playhouse.

The premise of this esoteric, meandering experimental spin-off from Shakespeare's Richard III resembles those of Tom Stoppard's Rosencrantz and Guildenstern Are Dead and Paula Vogel's Desdemona: A Play About a Handkerchief. Each delves into characters caught up in well-known dramas about more important, dangerous people. Except that Richard III is a fictionalized version of real history.

Chaurette, a Quebecois writing in French, evidently wants to emulate Shakespeare's eloquence, as does his English-language translator, Linda Gaboriau. The six-woman cast, as directed by Sheila McKenna, does extremely well in conveying the meaning and drama of those words, while also successfully executing co-director Andrè Koslowski's choreography.

Plus, McKenna and Koslowski have filled a provocative playing space fascinatingly and colorfully, with such items as shape-shifting costumes and a kind of sandbox wherein the women repeatedly slide into something resembling coarse sea salt. Yea, verily, you have plenty of stimuli directing you to pondering the symbolism, should you care to.

However, you don't get much chance to empathize with these historically significant women, who include two queens and two more women who could become queens. Sure, you get the idea that they claw and rail at each other in anger over being on the periphery of history, even as Richard carries out his deadly machinations towards kingship. But their actions and speeches fragment into multiple directions of space and time, like out-of-orbit satellites in Chaurette's quirky personal universe.

Adding to the confusion, this play doesn't stick to the facts of either Shakespeare's play or of the real history it's based on. Instead, Chaurette gets into that over-worked staple of French intellectualism, the dichotomy between reality and fantasy. And should you want clues about who relates to whom and why, you get scant help from the program book, which suggests you "make your own contribution."

The performers do create several strong individual portraits. Amy Landis is memorable as Anne Warwick, Richard's scheming wife-to-be; so is verbally virtuosic Bridget Connors, playing the role of Margaret of Anjou, the widow of Henry VI.

Everyone has worked mightily to bring this off. But why isn't the audience provided with informative printed background? More importantly, what is Chaurette trying to tell us in this pretentious project? 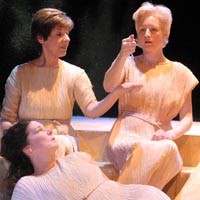 Courtesy of Drew Yenchak
Women who would be king: (clockwise from left) Shirley Tannenbaum, Amy Landis and Bridget Connors in The Rep's The Queens.