The Pyrotopia festival of fire arts is back

"It felt like we had created this great beast and we needed to feed it." 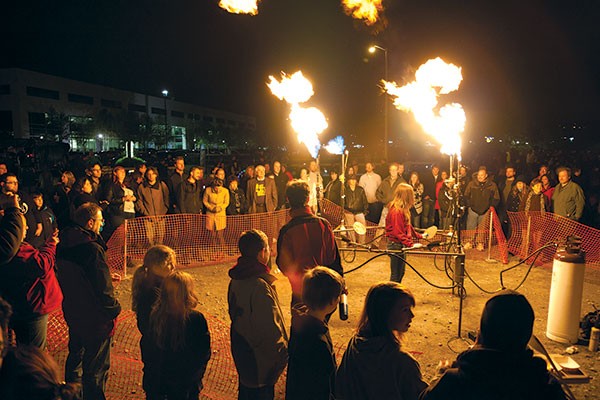 Photo courtesy of Renee Rosensteel
Famous flames: One of the attractions at the 2012 Pyrotopia

Originally, Eric Singer thought he might get a few hundred people in a parking lot.

Singer, an engineer, roboticist and artist with an affinity for fire, wanted to showcase works by students in his class at DIY engineering space Hack Pittsburgh, titled "How to Build Your Own Personal Flamethrower." He reached out to the other branch of fire arts, performers who spin pois and swirl flaming hula hoops, and Pyrotopia was born.

The first festival was held in April 2012, on a patch of land outside Homestead's historic Pump House. The free day-long event drew 4,000 people, with cars filling the lots of the neighboring Waterfront shopping plaza. "It blew [my expectations] out of the water wildly," says Singer.

The second Pyrotopia comes to Munhall this week. "If you had asked me a week before [2012's festival] if I would do it again, I would have said, ‘No way,'" says Singer. He notes that days before that festival, it seemed as if the insurers would back out. "But after seeing the response, it felt like we had created this great beast and we needed to feed it."

Pyrotopia 2014 has attracted performers from as far away as Boston, Toronto and Indianapolis. New installations will include Riskee Ball — some Toronto designers' adaptation of skee ball made to spout flames to celebrate high scores — and Katy Perry the Unicorn, a former carousel horse rigged to sneeze glitter, pee lemonade and shoot fire from her horn. (She's apparently popular at New York City hipster weddings.) Returning is Singer's own Flaming Simon, a version of the Milton Bradley memory and repetition game in which players tap drums that spout flames from tiki-like torches.

The festival, which Singer says will now be annual, has a permanent home in Westfield Park. "Munhall has told us we can stay for as long as we like."

Though the first festival was successful, insurance is still "the biggest cost issue for us," says Singer (and one reason Pyrotopia now charges admission). "Most of us have been doing this for 10, 15 years, so we know what we are doing. And if there is ever an incident, we will be done forever, so there won't be any incidents."