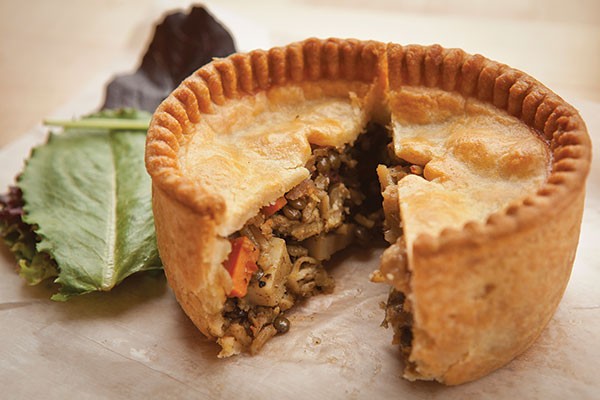 The Pub Chip Shop is a new venture by the proprietors of Pittsburgh's hub of British dining, Piper's Pub. It's situated in an adjacent storefront, and is dedicated to the street and takeaway food of the U.K. Though the Britishisms here are thick — "chips," of course, are what we call "fries," Parma sausages are called "bangers" and bacon, "rashers" — the shop's Sweeney Todd-esque logo of a cleaver dripping blood rebukes any twee preconceptions.

And, best of all, the fare, which purports to be authentic, is prepared with extraordinary care evinced by every item — from pastry crusts to beer-battered haddock to housemade sauces.

Part of the treat was that, in addition to the real-deal versions of fish, chips and pasties, Pub Chip Shop also offers a taste of some more modern British flavors. These days, Indian and Pakistani places are apt to outnumber fish-and-chip shops on the streets of Britain, and accordingly, Pub Chip Shop serves not only meat and Stilton pies, but those with fillings of chicken curry and vegan vindaloo. Another immigrant favorite is doner kebab. A few cross-cultural hybrids, like a chili dog with Welsh cheddar sauce, and steak and mac-and-cheese on a roll, round out the locally unique menu.

Sandwiches here are known by the term for the bread they're made with — "bap," a big, buttery, yeasty, lightly crusty roll that would probably do for a small bread bowl for soup. Jason tried bap with a banger. The mildly-flavored link was tender and savory without being heavy. A single piece of sausage, halved and crisped on the griddle, was still a bit overwhelmed by the enormous bap. The menu suggested gravy, but for portability we swapped in that Welsh cheddar sauce, which was decidedly not sharp enough.

Sage sausage was more than ample wrapped in puff pastry in the sausage roll. The pastry, extraordinarily tender and flaky around the meat, was a real treat, but the proportions of the roll were off, and by halfway through, things started getting heavy. Some spicy mustard might have helped liven up the flavor, but the real issue was the realization that sometimes, there can be such a thing as too much sausage.

But what, you say, about the fish and chips? Pittsburgh, especially this time of year, is a town that knows its fried fish. Here, beer-battered haddock meant thick, meaty pieces in a light, crispy shell that might not win a city-wide contest, but probably beats most of what you'll get on East Carson. The fresh, housemade tartar and cocktail sauces were a clear step above, and the chips — well, let us linger a while upon the subject of the chips.

In the States, we're used to three basic styles: shoestring, thin and crisp with a hint of fluffiness; thick-cut, with dark, crisp edges; and steak fries, wedges that aspire to a fluffy, not mealy, interior. These chips didn't fit in any of these categories. They were thicker than thick-cut, very fluffy within, with a color deeper than shoestring-golden, yet a similarly light exterior crust. If you care at all for fries, you owe yourself an order.

And while you're there, don't miss the pies and pasties (rhymes with dynasties), which feature a hearty, savory crust that is flaky yet bakes up tender, not crunchy, thanks to its traditional ingredient: lard. (A vegan version is also available.) It was good enough that we didn't mind the occasional bite with too little filling. Not to malign the fillings: In addition to the aforementioned curries and traditional Scotch (lamb), Cornish (steak, with hearty morsels of root vegetables that retained their individual flavors) and English (pork topped with a layer of tangy Stilton), you can try steak and oyster (alas, out the night we visited), salmon au gratin and, inevitably, pierogie.

Another dish adapted to local ingredients was the Lake Erie perch taco. The two filets of cornmeal-breaded fish were excellent in themselves, but more than filled the taco, which was a bit scant on other ingredients — cabbage, cilantro and Baja sauce — which would've given it depth and moisture.

Taco notwithstanding, The Pub Chip Shop serves food invented by and for British commoners, but the quality in Pittsburgh is distinctly uncommon.