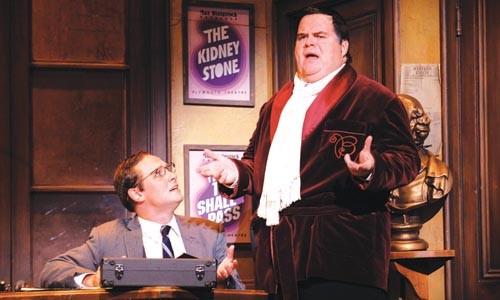 Pittsburgh CLO has produced a great version of The Producers, the musical. This wild and crazy visit to summer camp features perfectly looney-tuned performances amid snazzy sets. The laughs stay broad and saucy, so if deliberate tastelessness is not to your taste, stay home and watch Bambi romping ... the Disney version. And, if you're gay ... well, this show by Mel Brooks and Thomas Meehan is about the theater and, as you should know, there are gay people in the theater. And Brooks has long been known for off-the-wall outrageousness.

This 2001 adaptation of the 1968 movie retains much of the original plot. Brooks added songs with generic music and, once in a while, funny lyrics. So think of this not as a musical musical, but as a musically decorated comedy, one conceived in and dedicated to the proposition that musicals sell better than plays, e.g. Spamalot.

Max Bialystock and Leo Bloom scheme to put on Broadway's worst show ever so it will close instantly, while they pocket the investments. Max renews his services to aged and lusty long-time lady donors after he and Leo stumble upon Springtime for Hitler. The script is by neo-Nazi Franz Liebkind, who cherishes Der Führer's softer spots, such as not eating dead animals and adoring live children. Then the producers hire director Roger De Bris, who, along with his conjugal secretary, Carmen Ghia, believe that shows need to be gay. But the best-laid men ... er, plans ... go awry.

John Treacy Egan plays Max just right, with adept timing, suggesting Jackie Gleason on a good night. Stuart Marland hits real comic stride as Roger taking on the role of Hitler. And Madeline Doherty's version of a cute, little, libidinous biddy bidding for favors deserves a reward. Jim Stanek and Joey Fatone, as Leo and Franz, sometimes overdo their shticks, not that that ruins the total effect. Who gives a shtup anyway? Meanwhile, the ensemble dances and sings with precision and style.

Director Bill Burns gets wonderful laughs with the dialogue, and the non-stop bits and pieces. Moreover, he and the cast get delightful snap and zing from Susan Stroman's choreography using walkers as substitutes for dancing feet, or evoking a Busby Berkeley number, including, appropriately, dummies as storm troopers. Other great puppetry: Franz's pigeons.

You won't go home humming the melodies; you will go home and tickle friends when you zonk them with the gags.