The Princess Switch is fun nonsense

Vanessa Hudgens plays two identical women who are not twins 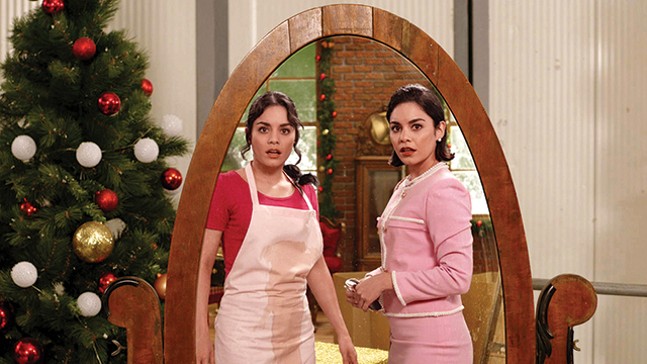 It was inevitable that Netflix would start producing corny holiday movies in the vein of the Hallmark channel. This year’s addition, The Princess Switch, stars Vanessa Hudgens as two different people, a baker and a princess, who switch places.

Stacy (Hudgens) runs a bakery in Chicago with her best friend Kevin (Nick Sagar). She gets invited to a baking competition in Belgravia (a fake, rich, snowy country). She’s skeptical because it’s Christmastime and the bakery is busy, but goes anyway, bringing Kevin and his daughter with her. Doesn’t she have customers who ordered cakes for the holidays? That, along with thousands of other questions, is irrelevant in this universe.

Before the competition, Stacy – who wears a baseball hat that says “Chicago” – accidentally runs into the soon-to-be princess of Belgravia, Margaret, who is about to marry Prince Edward (Sam Palladio). And by gosh, the two of them look damn near identical! The women immediately accept this fact and ask no further questions. Wanting to get a taste of a peasant life before marriage, Margaret suggests they switch places for a few days, and Stacy agrees because Midwesterners are nice.

Predictably, fancy Margaret falls for hot peasant Kevin, who is comically ripped, and Stacy falls for Prince Edward, who rides horses. After the baking competition, everyone starts their new happy lives.

In both realities, Hudgens has a terrible British accent, the wardrobe looks like it came from Forever 21, and there’s an inexplicable magic old man. It also cannot be stressed enough that these two identical women are not twins. They conclude that they must be distant cousins. Again, not twins.

The Princess Switch is a fun piece of nonsense to watch during the holidays when the classics feel tired, or when you don’t get the Hallmark Channel.

The Princess Switch is now streaming on Netflix.