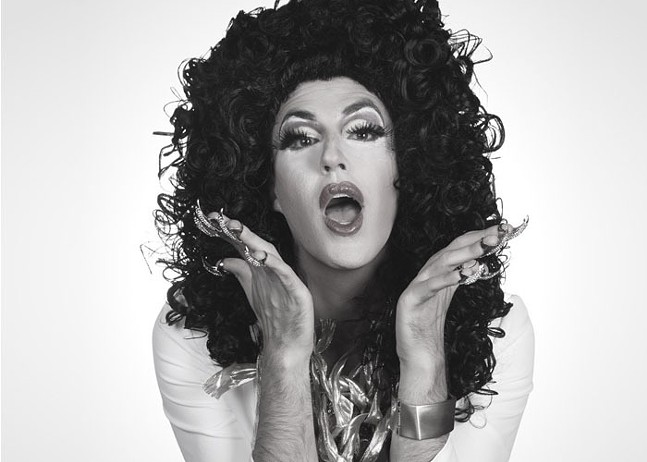 Photo: Renee Rosensteel
Princess Jafar
Back in 2015, a new figure started to take shape on the Pittsburgh art scene. Calling herself Princess Jafar, the singer, drag artist, and performer played host to events, gathering others artists and creatives to perform alongside her. These events, titled Princess Jafar & Friends, gave stage time to various local up-and-coming artists.

Princess Jafar will take the stage again for her new show, The Princess is Right: An Interactive Game Show. Taking place at the New Hazlett Theater on Thu., Feb. 17 and Fri., Feb. 18, with showings at 11 a.m. or 8 p.m., the show will give participants a chance to win fabulous trips, cold hard cash, and other prizes.

“Even though we are still playing with TV show formats of old sitcoms and late-night specials like we have in past productions, this show differs from other Princess Jafar shows because it focuses on the game show element,” Princess Jafar told Pittsburgh City Paper over an email. “Our goal with The Princess Is Right is to give back to the audiences who have made it through a few very tough years."

In another statement, Princess Jafar expands on this, saying the show is "actually filling in for what the local government cannot do" by giving away free bus passes, lead filters for tap water, cash, and washers and dryers.

She adds that the whole cast consists of LGBTQIA people of color.

Jafar also credits working with the New Hazlett’s CSA program, and with Kristin Helfrich, René Conrad, Dylan Baker, and Phoebe Coztanza Orr, for helping to elevate the production "to a level I know the entire team is going to be extremely proud of.”

“Princess Jafar has been seen from East Liberty to the South Side producing hilarious late-night talk shows,” says New Hazlett director of programming Kristin Helfrich in a press release. “We wanted to see what would happen when we supported the Princess as she created a fully produced interactive game show complete with special guests and amazing prizes."

Princess Jafar moved to Pittsburgh around 2012 and started cutting her teeth in bars and venues across the city as a drag performer, her original shows being described as "genre-bending, hilarious productions" incorporating themes like '90s pop culture and queer influences.

Princess Jafar is originally from Ohio, a state that is often pitted against Pittsburgh, but Jafar says Pittsburgh is where she found home.

“Pittsburgh is the place where all my dreams have come true," says Princess Jafar. "I grew up feeling like such an outcast as a queer Arab kid in the middle of Ohio, and it wasn’t until around 2012 or 2013 and moving to Pittsburgh that I felt the encouragement to confidently embrace myself. I’m forever grateful to the city and my friends and collaborators I’ve made here."

She says this is why she's so vocal about injustices that affect her loved ones and Pittsburgh communities, "specifically regarding racial justice, clean water access, fair pay, housing, and medical care."

This year marks five years of the performer playing Princess Jafar, and the anniversary led her to reflect on how she can be a “villain for good” while also being an artist and community member. A press release says she has raised over $25,000 for queer Pittsburgh artists of color since 2017 and plans to increase that amount to $50,000 over the next few years. As part of the New Hazlett show, Princess Jafar will also award $500 to the charity of a winner’s choice.
The Princess is Right: An Interactive Game Show. 11 a.m. and 8 p.m. Thu., Feb. 17-Fri., Feb. 18. 6 Allegheny Square East., North Side. $15-25.16 and over. newhazletttheater.org