The Pressure rises steadily through the old-school ska ranks

"The guys and girls in the scooter scene are into the '60s vibe." 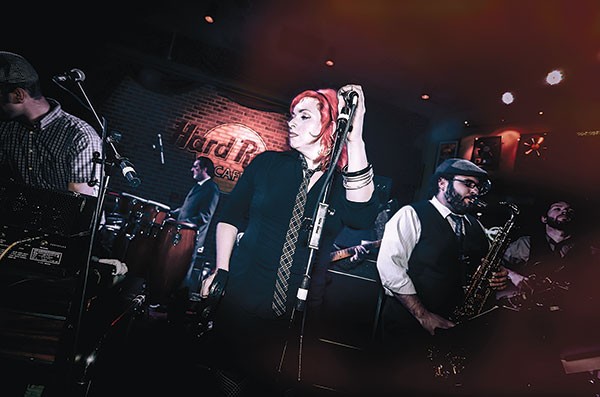 THE PRESSURE LP RELEASE with THE SHIFTERS, PANDMIC DJS.

"It's often like, ‘What shows can we play where we just play by ourselves?'" says guitarist and founding member David Riel. "We play a lot of shows where we do two sets, or play with [DJs] we know who spin this kind of music. There are a couple of more third-wave ska bands we've played with, but I think when we play, their fans feel like they're watching the oldies channel or something."

The Pressure has been holding down the subgenre since forming in 2008; Riel founded the band, singer Mz. Annie M. came soon after, and the rest of the band has come on board since, after a few lineup changes. The current roster took form when Eric Mazurak moved to Pittsburgh from Detroit and joined; he writes most of the band's material now, and recorded The Pressure's new LP and 7-inch single, both of which are being released on March 1.

Riel and Mazurak had already known each other through the vintage-scooter scene — which plays a big role in the band, as folks who care about vintage scooters tend also to know a thing or two about vintage music.

"The guys and girls in the scooter scene are into the '60s vibe," says Riel. "They know the ska and reggae of that era. We always try to play shows at scooter rallies."

While it can be lonely out there in Pittsburgh for an old-school ska band, though, there are some advantages. When an old-school ska or reggae name comes through town on tour, The Pressure is an obvious choice to open the show — the band has been booked with the likes of The English Beat and Toots and the Maytals.