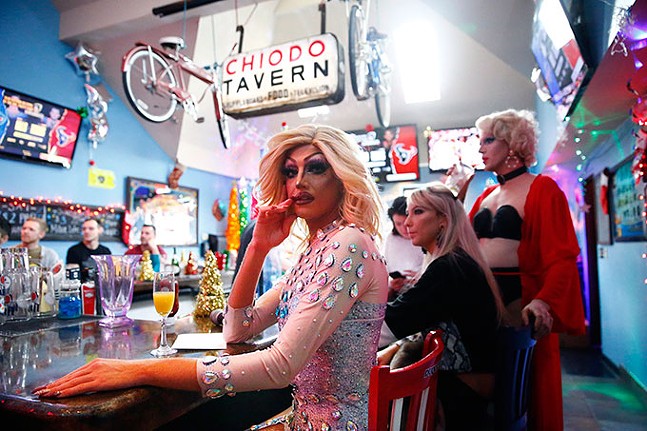 CP Photo: Jared Wickerham
Miss V performs during Franks N' Queens drag brunch at Frank's Bar and Grill in Shadyside on Sat., Jan. 4.
When the Hard Rock Cafe in South Side started hosting drag brunches two years ago, the organizers ran into a problem: Many patrons had no idea about tipping etiquette, an integral component for both the show's energy and the performers' bottom line.

“We always have to have a lot of dollars ready to change out some bills, because they’re not prepared,” says Pittsburgh Hard Rock Cafe sales and marketing manager, Roy Martin-Smith.

Martin-Smith introduced drag brunches to Hard Rock when he noticed other spaces around Pittsburgh hosting them, including Olive or Twist and Ace Hotel.

But much like his tipping-illiterate patrons, he had never actually attended a drag show. To remedy this, he visited Blue Moon, a popular drag spot in Lawrenceville, and asked his gay staff members and co-workers for advice. They suggested contacting local drag maven Lola LeCroix, who, among other things, hosts a regular drag brunch at 5801 in Shadyside.

“Lola and I hooked up and we’ve been working together ever since,” says Martin-Smith, who also organizes events with local drag impersonator, Joe King. “I kind of defer to her for anything that we want to do.”

Since then, the restaurant and concert venue has welcomed audiences of up to 100 to multiple brunch shows, where four to five queens perform dance numbers and do crowd-work. 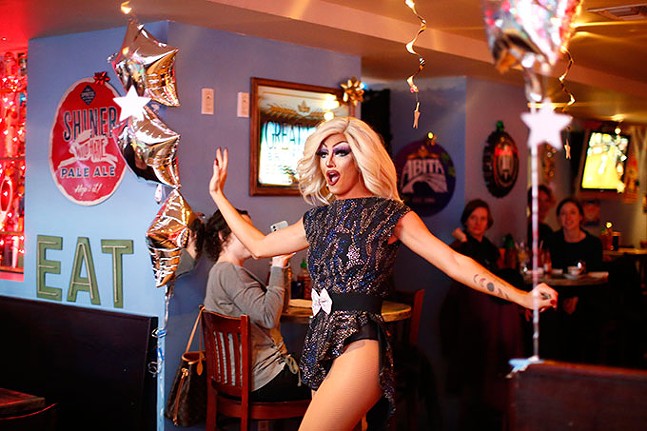 Martin-Smith believes the brunches, as well as the other drag events held at Hard Rock, align with his own values as a supporter of the gay community, and what he calls Hard Rock’s motto of “love all, serve all.”

He adds that opening Hard Rock, a chain venue located in the major business district of Station Square, to drag brunches helps make the art form more accessible to the straight community, and to people unable or unwilling to attend late-night drag shows at bars and clubs.

He also compares drag to the music movements Hard Rock represents, adding that it has a lot in common with the aesthetics of glam rock, hair metal, and punk acts like David Bowie, Poison, and the New York Dolls.

“Drag is just as much rock 'n' roll as anything,” says Martin-Smith. “It’s got an edge to some degree, and it’s becoming more mainstream. When KISS came out, everyone thought they were Satan himself. At the time, it was so taboo. … It’s the same thing with drag – at one time it might have been more shocking and taboo. … But the more we can expose people to this, the better it is, I think.” 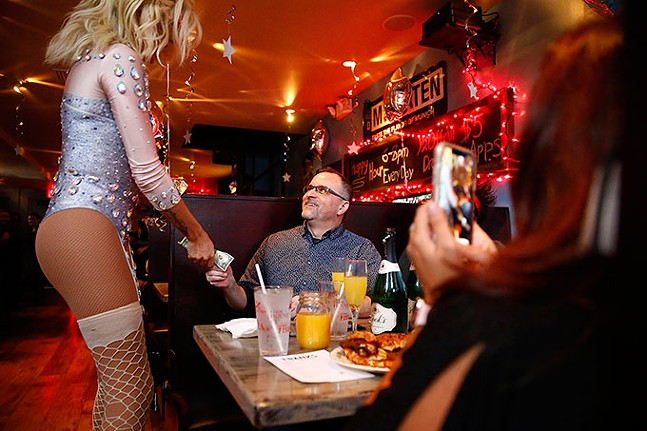 CP photo: Jared Wickerham
Patrons hand out tips to performers during a drag brunch at Frank's Bar and Grill.

“If it’s their first or one of their first times coming to a drag show, we want people to leave having the best time, having the best memories of it, wanting to come back, but also put their foot into other drag shows, as well,” says Skye, who started doing drag in Feb. 2019 and is now a regular performer at the Brewer's Hotel bar in the Strip District.

On Jan. 19, she and her partner, Indi Skies, will host the Goddess Drag Brunch, the first-ever drag brunch at the rooftop restaurant Over Eden at the Lawrenceville hotel TRYP.


“There’s definitely a big glamour aspect to it,” she says, adding that audiences can expect several queens doing a mix of lip-syncing, live singing, and dancing. She believes restaurants and other places now recognize the demand for drag events and how it can benefit everyone involved.

“It’s a great moneymaker for the venues and the queens as well,” she says.

Franki Wasik has definitely seen the advantage of hosting drag brunches at Franks Bar and Grill, a combination bar and fine dining establishment she owns and runs in Shadyside. In the short time since they opened in June 2019, they've hosted four Franks 'N' Queens drag brunches with local drag acts Mother Oak and Miss V. With a capacity of around 70 diners, some of the events either sold out or nearly sold out.

“We’re really new and we’re trying new things, and the brunch has just been taking off, so it’s been helping us get noticed as well,” says Wasik.

She also expresses surprise at the diversity of the brunch customers, whom she says range widely in age, from twentysomethings to grandparents. Even though the event is 21 and over, she says they once made an exception for two young female RuPaul’s Drag Race fans whose parents wanted to bring them to the show, despite its sometimes risqué content.

“I told the queens what was happening and said, ‘Mom and dad said you don’t have to censor it,’” says Wasik, adding that underage patrons are “not a typical thing” at the brunches.

Martin-Smith has also been surprised at the demographics of Hard Rock's drag brunches, including one group of men who regularly attended the events.

“I think they owned a trucking company,” says Martin-Smith. “They would bring their sons and coworkers, and they were all these big, burly guys you would not expect to be at a drag show. But they loved it. It was really great to see.”

Just as unexpected are drag events popping up at area volunteer fire departments. Among them is the Presto Volunteer Fire Department (VFD), who teamed up with the Bridgeville VFD to present its first drag bingo fundraiser this month.

With 250 tickets available, the event sold out immediately.

“We sold out of tickets before they were even printed,” says Brad Falick, captain of the Presto VFD located in Collier Township. “I had people who were upset because they couldn’t get them.”

As a result, Falick says they plan on hosting another drag bingo next April. “We tend to ride the wave,” he says. “Whatever is happening and making money at the time, we’ll follow.”

But not everyone is as accepting, something the Carnegie Library of Pittsburgh (CLP) discovered last year when it had to cancel the Drag Queen Story Hour due to violent threats on social media. Launched in Pittsburgh in 2017, the event pairs a children’s library specialist with a local drag performer to present children’s books.

Despite the setback, Bennett says the library is “currently planning to present Drag Queen Story Hour in 2020."

“We are very proud of our Drag Queen Story Hour,” says Bennett, adding that it “helps children embrace their own differences and learn how to treat others with kindness and respect.”

Martin-Smith says he has received some negative comments on social media about Hard Rock’s drag brunch, but seems undeterred by the feedback. While he applauds strides that have been made with LGBTQ rights and acceptance, he recognizes that the movement still has a long way to go, and hopes creating more spaces for drag shows can help with that.

“You don’t know who out in the community will really like it, and the more that do, the better, because it makes that whole [LGBTQ] community feel safer to some degree, and that’s ultimately what I’d like to see happen."