The best-selling "Elvis" popsicle is made with peanut butter, banana and honey 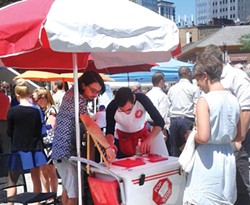 Todd Saulle, owner of The Pop Stop, and his employee, Mike Sestric, serve customers at the busy Farmers' Market in Market Square

Todd Saulle was an English teacher ... until he became a professional ice-pop-maker.

"I just love the creative aspect of branding and coming up with new ideas," says Saulle, who majored in English literature and history at the University of Pittsburgh before teaching at Central Catholic High School for six years.

Saulle brings his popsicle cart to local farmers' markets, and for $3 a pop, he offers a rotating selection of the 25 flavors he's developed. These include: pineapple-basil, strawberry lemonade, cucumber-mint-gin and the Elvis — a top-seller made with peanut butter, banana and honey.

"Gourmet popsicles hadn't really been done in Pittsburgh," Saulle says. "When it came to popsicles, there was only one kind — in a package, processed, with added colors. Ours have none of that."

He also owns a 1970s-era former Good Humor truck that he peddles from and has recently invested in a hand-cranked ice-shaver. With the shaver, he hopes to expand his menu to other gourmet ice treats, including Asian-inspired ones made with sweetened condensed milk.

"The goal is to have an actual shop by next summer, but that might be ambitious," Saulle says.

But he's on track this summer to reach his goal of selling 10,000 popsicles.

For now, you can catch him at the farmers' markets in Market Square and Fox Chapel, during some concerts at Hartwood Acres, and outside of Gus's Café, in Lawrenceville, for Taco Tuesdays. www.thepopstopshere.com