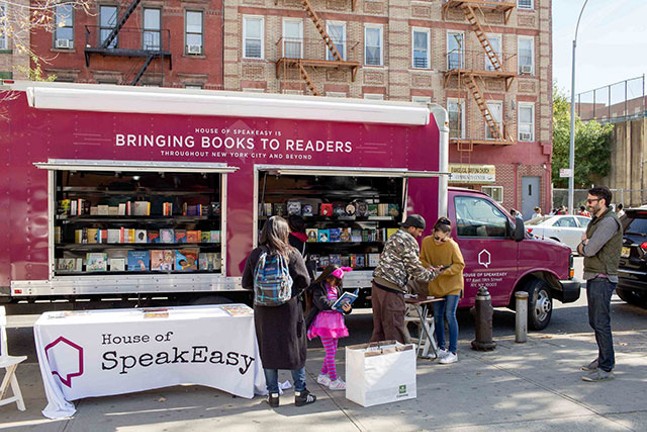 House of Speakeasy
Poetry to the People tour will give out free books outside of Carnegie Library-Main.

On Sat., June 15, visitors to Carnegie Library's main branch will find collections of books to borrow not only inside the building but outside of it. The Poetry to the People tour is a multi-city book truck road trip — beginning in New York and ending in New Orleans — that brings free books and poetry readings to every stop.

“There are plenty of places in New York that don’t have access to books, but there are many more places in parts of the country that need a delivery system for books,” says Paul Morris, strategic director at House of Speakeasy.

For every city on the tour, Poetry to the People will work with local literary organizations to host readings and other events. In Pittsburgh, there will be readings by poets Rickey Laurentiis and Jenny Johnson, as well as local teen poets. All the stops on the tour will feature teen poets reading alongside more established ones.

“Part of our mission on this trip is to highlight local organizations that are already doing great work in the community,” says Rob Spillman, one of the founders of Narrative 4.

The Pittsburgh event is hosted in conjunction with Pittsburgh Arts & Lectures.

Spillman adds that, while the book truck will feature all kinds of books, including those by authors featured on the tour, they chose to focus on poetry for its accessibility.

“We’re bringing all sorts of books, but the events are mainly poetry specific because it’s the easiest to engage with particularly teen writers,” he says. “Poetry seems very vital and urgent right now, and it’s just like a gateway to engage on a storytelling level.”

The tour features major cities as well as small but thriving literary communities, like Floyd County, Ky., and Arnaudville, La. They also take suggestions for places they may have overlooked. After Pittsburgh, the team originally planned to go straight to Floyd County, Ind. before someone suggested Columbus, Ohio.

Prior to this tour, the book truck's longest trip had been three or four hours, but that will change after the1,800-mile trip. The hope is that the journey will serve as a test run for future endeavors outside New York.

“The way we look at the book truck, it opens doors for people to access literature and ideas,” says Morris. “We’re using it as a tool to engage communities while giving away books.”

The team hopes to not only give away free books, but to create a sense of community and belonging for teenagers, for overlooked communities, and for anyone who feels they need their voice to be heard.

“There are a lot of people who don’t feel like they have a place or a platform on which to speak or share their stories, or they feel disconnected,” says Erin Cox, executive producer at House of Speakeasy. “And we’ve found that when we’re able to do these kinds of programs, people can say, ‘Oh that’s me too, I can relate to that.’”