The Playboy of the Western World

The Playboy of the Western World, by John Millington Synge, is often considered a masterpiece. But if you've never witnessed it -- productions are uncommon these days -- Pittsburgh Irish & Classical Theatre's staging might make you wonder how it acquired that reputation.

The plot comes across. The language doesn't. Director Andrew S. Paul has staged everything dynamically, with a capable and energetic cast. However, given that 1907 play's reputation depends largely on Synge's skillful replication of regional speech, you should be able to understand the dialogue. Certainly the actors have mastered alien dialects and accents over a period of weeks. But Paul seems to have overlooked the idea that audiences need to thoroughly understand what is being said in just two hours. Clarity should take precedence over authenticity. On opening night, blank faces ringed the stage out there in the aural and physical darkness. At intermission, informal chats with other attendees confirmed puzzlement, even annoyance.

The play comes across as a wild comedy with a satirical edge. Young Christopher Mahon stumbles into a small Irish town's pub far from home. He reveals that he murdered his father. Instead of condemnation, the townspeople idolize him. While local women vie for his attention, however, he only has eyes for Pegeen Mike. But when Christy's father shows up more alive than dead, the locals turn on Christy as a fraud.

You can follow all that, and how Synge skewers rural ignorance and duplicity -- points Paul's staging emphasizes with imaginative leaps and romps all over the playing space. And when passionate characters become vociferous, there's no mistaking why. You certainly appreciate the talents of visiting actors Jerzy Gwiazdowski and Mari Howells, portraying Christy and Pegeen Mike, as well as Pittsburgh's Philip Winters, as Old Mahon.

Moreover, PICT again provides informative program notes; reading them is helpful. There's a five-page glossary, and text from the script that you could find bewildering, e.g, " You've turned me a likely gaffer in the end of all, the way I'll go romancing through a romping lifetime from this hour to the dawning of the Judgment Day." Imagine that pronounced trippingly on the tongue.

A few people on opening night were having a great time. They must have come thoroughly prepared. 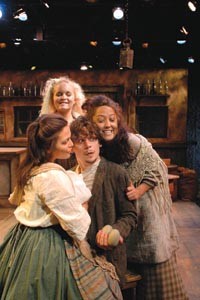