Plans show that Point Park would replace a pedestrian-scaled streetscape with a large blank wall, which would not be acceptable. 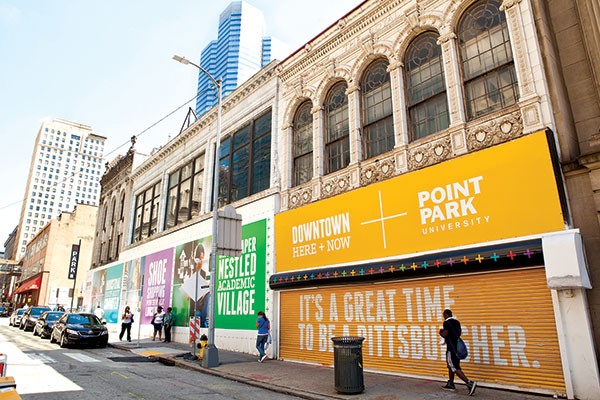 Photo by Heather Mull
On the (chopping) block: As Point Park expands, will these facades on Forbes Avenue, Downtown, be reconstructed?

On July 23, the City of Pittsburgh's Planning Commission voted unamimously to give Point Park University permission to "deconstruct" buildings at 320, 322 and 330 Forbes Ave. These can now come down to make room for a project for a new Downtown theater complex for the Pittsburgh Playhouse on these and adjoining parcels, nestled tightly on the block bounded by Forbes and Fourth avenues and Wood and Smithfield streets. A crucial condition of the approval is that the ornamental terra cotta façade from the 320 Forbes building — the former Honus Wagner sporting-goods store — will be carefully saved and reconstructed elsewhere in the Playhouse project.

But did the planning commission have enough information to make a well-considered decision? Significant evidence suggests not.

The approval process has elicited varying opinions, from those who endorse the proposal as a practical necessity in a larger scheme to those who see it as a regrettable loss of historic structures. But the expected easy separation between developers and preservationists has not taken shape as might be expected.

Rob Pfaffmann is an award-winning contemporary architect, probably best known regionally for his efforts to preserve the former Civic Arena. He argues that the buildings, or at least their façades, should have been saved in place. "This corridor has the potential to be one of the most spectacular streetscapes in the city," he says. During the debates about the redevelopment of Fifth and Forbes avenues during the Murphy mayoral administration, a published plan by UDA Architects included these façades among a larger group that were designated for preservation. "Why aren't we pursuing that plan?" asks Pfaffman.

In an interview, planning commission member Page Thomas noted that while the three properties in question are National Register of Historic Places-eligible, they have not been nominated or approved, so there is no legal obstacle to removing them.

Meanwhile, at the July 23 hearing, no one actually spoke in favor of preservation, though two letter-writers did. Instead, Arthur Ziegler, president of Pittsburgh History & Landmarks Foundation, endorsed Point Park's plan for the larger redevelopment, including removal of the façades and reuse of one.

His implication was that the university knows worthy buildings when it sees them. "Point Park has more restored buildings than anyone else in Downtown," Ziegler said. The school's existing student center, which will connect to the new theater project, consists of substantive historical bank buildings by noted architects Frederick Osterling and Alden & Harlow. Indeed, part of the new project will be the renovation of the Exchange Building, a distinctive Baroque Revival structure also by Charles M. Bartberger, which has much higher quality materials and design than the Forbes avenue structures.

When it comes to credibility in preservation issues, "I am comfortable with Arthur Ziegler," said planning-commission member Todd Reidbord. And Ziegler, along with preservation architect Ellis Schmidlapp and the greater Point Park constituency, might yet prove correct that these façades can go.

Still, the question remains: What will Point Park's new theater project actually be? While the university has presented its ground plans for the project, the work is still in early stages of design, so street elevations and perspective renderings, arguably requisite components of such a presentations, were not available. The planning commission's Thomas commented, "We don't see a vision for what it is to become. I don't know what I'm saying yes to."

Under such a condition, postponing the vote on demolition would have been more appropriate.

Thus far, for instance, plans show the replacement of a pedestrian-scaled streetscape by a large blank wall, which would not really be an acceptable solution in such an historic, pedestrian-scaled district. Architect Hal Hayes, a New York-based theater specialist who also teaches at Carnegie Mellon, suggests that the Honus Wagner façade would make an outstanding entrance in its current location. "There are possibilities for changing things around that could make that usable." Maybe a full streetscape of preserved façades is exactly what that long wall needs.

In fact, saving just the façade or part of the façade of an historic building is a widespread and common practice, though usually viewed as a distant second choice to saving an entire building. The preservation team should have gone into more detail as to why such a common technique is not possible or desirable here. A more detailed technical examination of these façades and what saving them would require was in order.

The irony is that, while Point Park will still submit a final land-development plan for approval of the Playhouse Theater project, the vote to allow demolition of the Forbes avenue façades is final.

Pfaffmann claims that a preservation group or individual could stop demolition by nominating the process for historic designation. But no such plan has yet been announced.