The Plague in Venice at Carnegie Mellon Drama 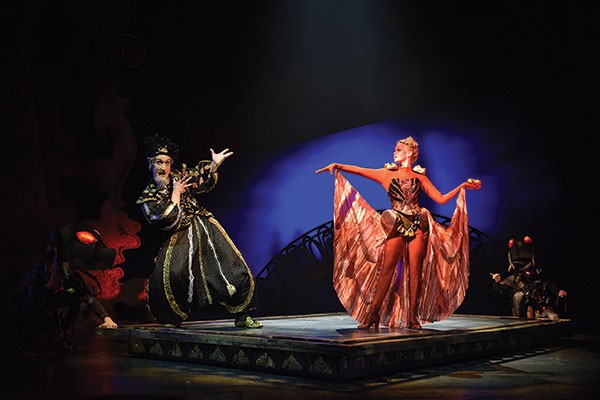 THE PLAGUE IN VENICE

If you like your plagues staged with gorgeous sets, lighting and costumes, then this is the plague for you.

Carnegie Mellon University School of Drama’s production of The Plague in Venice reminded me of once seeing a Ferrari on a Caribbean road pass a local woman, who began chuckling. When I asked why, she said, “The speed limit on this island is 35 mph.” That car is kind of like this show, which never really gets up to the speed of its satiric billing, but is still scintillating to watch.

Truax’s lighting is ethereal, and there is an instance in the show when he thickens the air and actually makes time stand still — under a huge, quivering, baroque moon.

The way Parker melds the costumes to the actors — creating hybrid beings with mystical capabilities — is brilliant. Caroline Pluta, as Plague, sizzles in her queenly red attire, yet is so cool she could just as easily pose for a fashion shoot in Vogue as hurl pestilence. And the harem pants worn by Sam McInerney as Pantalone would make MC Hammer jealous.

However, director Sasha Iliev’s adaptation of this Renaissance play by Flaminio Scala is simply overwhelmed by the slickness of the production. While certain actors did try to outshine the dazzling effects, more often they were swallowed by them.

Cara Ronzetti, as Lucretia, does punch through when she says, “It’s sad to be a tragic character stuck inside a comedy,” and gets a good laugh — not because it’s true, but because it’s ironic. Unfortunately, there are few such laughs during the performance, which is long, especially without an intermission.

Usually I love dazzling theater, but the flamboyant staging dulled the sting of this political satire — even the last line, which invoked the current presidential race. A more balanced production would not have trumped itself.