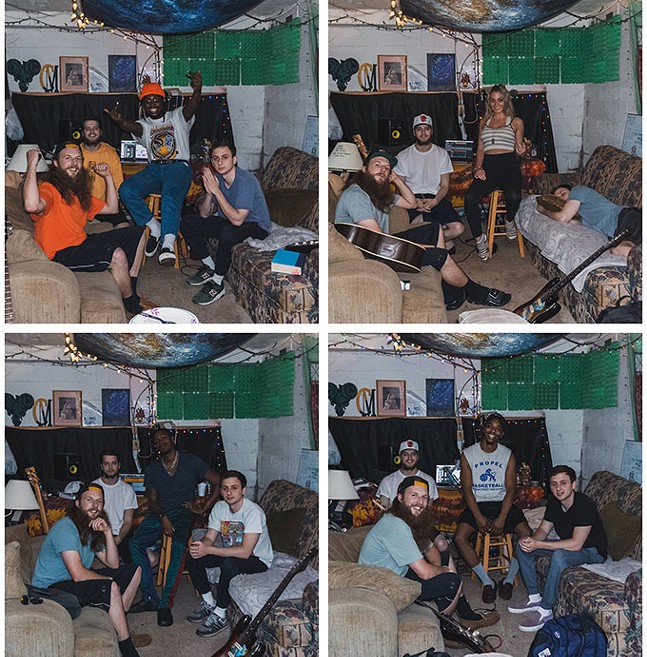 My Favorite Color and his production team One800 — Cody Maimone, Jeremy Rosinger, and Dom Pomposelli — create music with no preconceived ideas. The rapper (real name Anthony Willis) has been working with them since the four graduated from California University of Pennsylvania, and from the start, their process began by simply showing up at Maimone’s garage.

“We sit down with nothing,” says Maimone. “I’ll pick up a guitar; maybe Dom will get on the keys and Jeremey will get on the drum pad. I’ll maybe start playing some chords, and we’ll find a vibe, and then Willis will be like, ‘I like that’ … from there we’ll just kind of throw music at the wall while Willis writes.”

That collaborative process is what inspired One800 to start The Pittsburgh Sessions project. Over the course of the summer, 20 local artists entered Maimone’s garage and left with a brand new track.

“We feel there’s really no better way to get a genuine song,” says Maimone. “And we wanted to do that with people in the city and challenge ourselves.”

Beside wanting to branch out in the local scene, The Pittsburgh Sessions also came about because the One800 team had a realization. After finishing up Velma — My Favorite Color’s upcoming studio album set to drop this fall — the guys started thinking they might not be in Pittsburgh in six months.

Up until the sessions, My Favorite Color was the only musician One800 ever worked with. They didn’t have the desire, nor the time, to focus on other projects. But with the finalizing of Velma, and My Favorite Color’s decision to move back to his hometown of Los Angeles — he officially made the move a few weeks ago — their mindset shifted.

“Before, we were looking at it like we still wanted to grow as artists and producers and engineers,” says Maimone. “But we did that [collaborative, work-from-scratch] process for two or three years with Willis and got so much better and made so much music we thought, ‘What if we did this with other artists?’ We wanted the opportunity to work with artists that we believe in and have been inspired by in the city.”

Two mismatched couches facing each other, a tapestry showcasing trees and stars on the ceiling, string lights running the perimeter, a few sound-absorbing panels on the wall: Benji., PK Delay, Sierra Sellers, Linwood, Clara Kent, Abie L., Pet Zebra, livefromthecity, and more local talent stepped into One800s makeshift studio over the last months to participate in The Pittsburgh Sessions. For many, it was the first time they met the One800 team in person, and they were coming together to create music, with zero presets. Those first-time interactions, however, made collaboration easier.

“It’s human nature, the first time you meet someone, you want to put on a good impression,” says Maimone. “There’s this very strange energy of, like, you almost want to prove something to each other. I think that is a great chance to make something very unique and outside the box for both of you, because the way that you know each other is based on music, and it’s almost like you want to perform for each other.”

Overall, though, the process with each was laid back but focused, directed by the musician’s mood and energy. They had the map, and One800 was driving.

“The second that I can read that the artist isn’t vibing with it or [liking] what I am playing, immediately I’ll start veering off into another idea,” says Maimone.

The Pittsburgh Sessions are now complete and One800 is in the process of mixing and mastering the project, which will be released as an album this fall about two weeks after Velma makes its debut.

“It’s a cool opportunity for the city as a whole to shine a light on all the different styles and all the different artists that are in the city,” says Maimone. “It would be really cool if someone found this project and was like, ‘Wow, those artists all came from Pittsburgh?’”