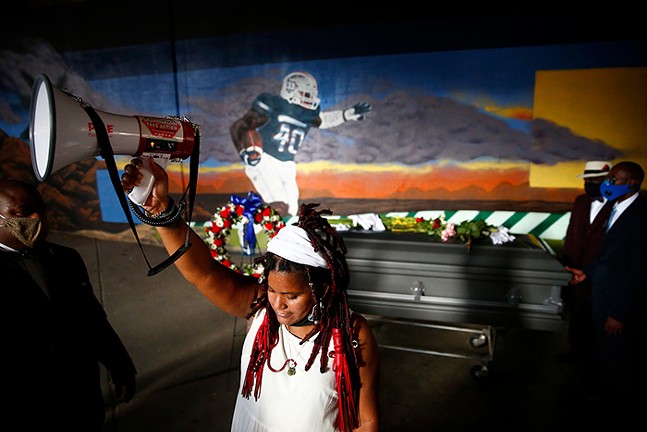 CP photo: Jared Wickerham
Dannielle Brown in front of a mural in honor of her son, Marquis Jaylen Brown
Dannielle Brown has been asking for answers about her son’s death for nearly two months now. Her son, Marquis, was a Duquesne University student who died in 2018. Brown came to Pittsburgh this July, saying she didn’t believe the university’s account of Marquis’ death. Since then, she has been on a hunger strike and garnered significant press attention, including some national publications.

But one large local publication has been absent from any Brown coverage: the Pittsburgh Post-Gazette. Pittsburgh’s largest newspaper has filed no stories, no editorials, no op-eds on Brown.

Brown’s story has become more complex as the weeks have passed. She's garnered support from prominent activists and Duquesne University has changed some of its policies as requested by Brown, but the university is also saying that Brown is refusing to meet with Duquesne University officials to review the police and internal report about Marquis’ death.

Adding to the absence of coverage in the Post-Gazette’s pages is a claim by a P-G reporter initially assigned to cover Brown’s story who says he had his coverage pulled by management.

Andrew Goldstein is a reporter at the Post-Gazette, and he told Pittsburgh City Paper that he was working on a story on Brown on July 5. Goldstein says he conducted a formal interview with Brown on July 5, complete with a P-G photographer there to take pictures. He says he turned in his story that afternoon, and his editors requested more info.

Goldstein went back a couple days later, and got official responses from Duquesne University officials, but he says that editors refused to run the story.

“They basically told me to drop it after that,” says Goldstein.

He says that management justified this decision because they didn't want to spread "unsubstantiated claims" being made by Brown. And editors noted to him that four witnesses and two investigations all came to the same conclusion.

“They also said they didn't want to glorify a hunger strike,” said Goldstein. “I did push back, but it was no use.”

A request for comment to Post-Gazette management went unreturned.

Duquesne University officials say the requests Brown are seeking are available to her. She and her counsel just need to arrange a meeting with officials to sign confidentiality agreements to review the Duquesne Public Safety file of her son’s death, which officials say are consistent with federal and state privacy laws. Duquesne University says that since Brown filed a lawsuit against the university, it's why it claims it needs her to go through this formal process in order to see official files. Brown has disputed the need to sign a non-disclosure agreement and continues to post objections on her social media pages to an agreement the university shared with her previous lawyer that would have had her view documents via Zoom. University officials say that previous lawyer is no longer representing Brown, and they are unsure of who her new and current representation is.

Goldstein says he understands a bit of the hesitations in printing because Brown’s claims have so far been unsubstantiated, and Duquesne University’s statements muddy the waters of the story. But, he says that “there should be a bit of reporting on this, even if not given it wall-to-wall coverage.”


In over 50 days of her hunger strike in Pittsburgh (Brown is in Washington D.C. this weekend for the March on Washington, the first time in months, she is not in Pittsburgh), there have been a number of noteworthy events the P-G could have reported on that didn't need heavy news reporting, including Brown's own mock funeral procession on Aug. 7, where Pittsburghers joined her as she marched with a casket from Freedom Corner to Duquesne University's Brottier Hall, a story picked up by national news media site The Undefeated.

But additionally, the Post-Gazette, and many other publications, run unsubstantiated claims all the time. The P-G ran claims made by Pittsburgh officials that those responsible for property damage and looting in relation to protests on May 30 were from outside the city. Those claims turned out to be false, as all people arrested that day were from the Greater Pittsburgh region, and many from the city itself.

The Newspaper Guild of Pittsburgh, the union that represents about 140 P-G journalists, has been in an ongoing battle with management over a new contract and actions by management dictating coverage. Guild members recently voted to authorize a strike and are awaiting a decision by parent union leadership. This comes after some P-G staffers made national headlines after management decided to ban Black journalists from Black Lives Matter protest coverage, claiming those journalists showcased bias on their social media.

CP read the draft that Goldstein submitted back in July for the Brown coverage. It’s like most early stories written about Brown, sympathetic, with several quotes from Brown. Goldstein says he had the ability to write the story more as a straight news story too, with additional input from Duquesne University, and he told his editor that. Also, Goldstein says that Duquesne University offered him the chance to review access to the university's internal investigation, which he says had not been released at that point, and P-G editors still refused to run a story.

“It's just frustrating,” says Goldstein. “I wouldn't have put the time in that I did or gone out on three separate occasions if I didn't fully intend on writing something.”