The Pittsburgh Pirates roll out the red carpet for Pup Night

“This is our first time at Pup Night, and oh my god, is it fantastic.”

Photo by Luke Thor Travis
Renee Felix, left with her Chihuahua, Francesca, and her mother, Linda Toth with her Chiweenie, Heather, got the dogs all dressed up for Pup Night at PNC Park.

Ushers at PNC Park aren’t allowed to talk to the media, but this particular employee just had to tell her favorite story about “Pup Night” at PNC Park.

“Last year, a huge storm rolled in on Pup Night; it was bad,” said the unnamed usher, her voice building like that incoming storm. “Everybody, the workers, the people and all the dogs crammed under these bleachers to wait out the storm. And you know what? There wasn’t one problem. All of these different people and all of these different sizes and breeds of dogs jammed into one spot and everybody got along.

“It was really hot, though.”

Over the past several years, the Pittsburgh Pirates-sponsored Pup Night has given pet owners the chance to take in a ballgame on the Miller Lite Rooftop Deck with their best four-legged friends. It’s also a chance to help out local animal shelters and advocacy groups, as a portion of the $32 ticket price — for one human and one canine fan — goes to a charity. On this night, the Western Pa. Humane Society was the beneficiary and even had an animal there for instant adoption. The Pirates host nearly a dozen of these events every season. The dates for the rest of the season are: July 9, Aug. 19, Aug. 23, Sept. 6 and Sept. 22. 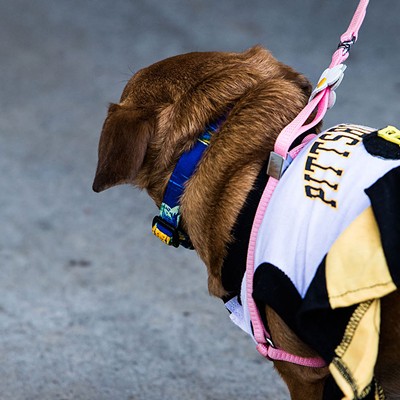 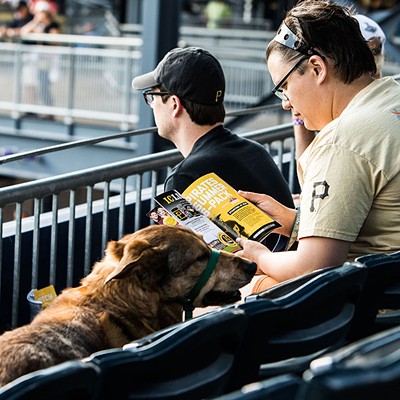 Walking into the designated Pup-Night area, the usher’s story became even more remarkable. There were dogs here of all shapes and sizes. There were giant specimens like Mikaela, a 160-pound Newfoundland landseer.  There were also tinier dogs like Butterz, the Papillion sitting in the lap of his owner’s father John Adduci; and Francesca, a Chihuahua, and Heather, a Chiweenie, owned respectively by Renee Felix, of Atlanta, and her mother, Linda Toth of Austintown, Ohio.

But despite the various breeds, everybody got along. There were bulldogs sniffing Yorkies, babies petting bulldogs, dogs splashing together in a plastic pool. There were smiles and laughter, and the ballgame hadn’t even started yet.

For Adduci, of Punxsutawney, the game was a perfect chance to visit with his daughter and son-in-law, Jessica and Tony Leikhram of Yonkers, N.Y. The Leikhrams were in town, and Adducci drove in because he knew Pup Night was the perfect place to take in a traditional Pittsburgh activity where the dog would also be welcome.

“I really think it’s great that the Pirates put this on, and it helps local shelters,” Aducci said.

Laura Halsey and her dog, Trella (an American field Labrador that she rescued from a shelter), were thrilled to be at the ballgame together.

“This is our first time at Pup Night, and oh my god, is it fantastic,” Halsey exclaimed. “There are so many types of dogs, and everyone is getting along. It’s just a great social occasion, and we’re helping a good cause, so how can it be a bad night?”