Unveil the Pens’ fourth championship banner, and enjoy a year of strutting around like we own the place. 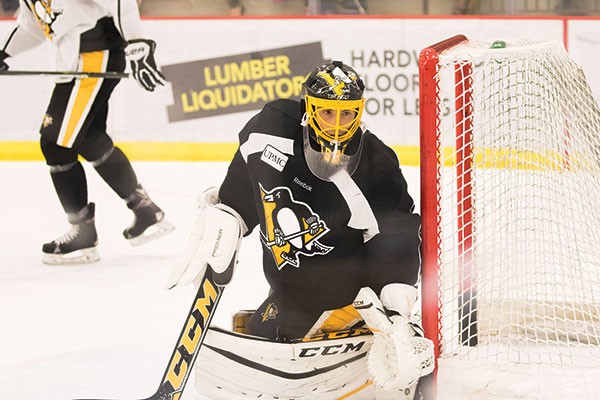 CP photo by Luke Thor Travis
Marc-Andre Fleury at Penguins practice on Sat., Oct. 1
Hockey has returned. It seems like we only just crammed 400,000 screaming fans into Downtown to celebrate the return of Lord Stanley. The Pirates’ three-year run of playoffs ended on Sunday, and now we need something to watch in between Steelers games.

Hockey doesn’t match the popularity of football, basketball, baseball or even auto racing and soccer. It does have the two things we like the most — speed and violence — but outside of hockey enclaves, America just won’t get on board. We get it here in Pittsburgh, of course. Perhaps there’s just a national prejudice against Canadians, which might also explain why the metric system and poutine also can’t gain footing in this country.

But one thing that other team sports can learn from hockey is how to do conduct a preseason.

Baseball players take four to six weeks to get ready for the year. They show up in late February and hang out until early April in Florida or Arizona. They ease their way into the regular season after enjoying four or five months off. They drag out the exhibition season playing 30 to 40 games, which is roughly a quarter of the regular schedule.

Football’s preseason takes four or five weeks in the brutal heat. Teams play four games, which like baseball is about one-fourth of the normal season. Football camp also starts after the players have had five or six months off to recover. Both sports schedule too many meaningless games because they can make preseason money, which does count.

That’s where hockey gets it right. Players get three weeks of practice and six or seven exhibition games, then it’s time to go. Not only that, if you’re the defending Stanley Cup champions, you just played barely four months ago. If you’re an elite player, you don’t have to play most of the exhibition games. For example, this year most of the stars are representing their countries in the World Cup.

This new season brings us a full year of bragging rights. No fan of any other team can talk trash on Pittsburgh until at least June. The New York Rangers have had that luxury one time in the past 76 years; I hope they took full advantage of it. The Flyers had trash-talking rights once in the past 41 years. Meanwhile, the Capitals have no idea what it feels like. The Penguins look to become the first team to repeat as champs since the 1997-98 Detroit Red Wings. Those Wings beat the Caps and Flyers to extend their respective miseries.

On the roster, not much has changed for the champs, except that we say goodbye to Beau Bennett and Ben Lovejoy, who are now semi-proud members of the New Jersey Devils. And we say hello again to David Warsofsky, who comes back to the Pens after a stint with the Devils. Other than that, the rest of the gang is back, save for goalie Matt Murray, who will miss the beginning of the season with a broken hand. The 22-year-old went 15-6 in the postseason and has more Stanley Cups than Curtis Joseph, Ron Hextall, Roberto Luongo, Henrik Lundqvist and Olaf Kolzig combined. Not bad for a guy who started kindergarten in 1999, so he was due for a little bad news. The Pens will have to rely on Marc-Andre Fleury. MAF has a Cup himself, and in the entire history of the NHL, only 17 goalies have won more games than him.

The last preseason game is Oct. 8 against perennial nobodies the Columbus Blue Jackets. That game is free to all kids. I’m thinking about getting a fake ID that says I’m 10, so I can get in for nothing. Seriously, the free game is a classy move, and it’s a lead that other teams and sports should follow. Baseball lets dogs in for free, but not children. The regular season starts Oct. 13 at home against the Cup-less and much-hated Washington Capitals. A week later, it’s a re-match of the finals, as the San Jose Sharks bring their silver medal to town. So unveil the Pens’ fourth championship banner, and enjoy a year of strutting around like we own the place. Because we kinda do.