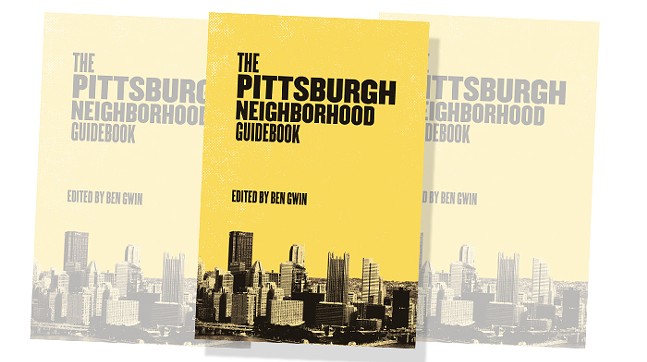 Many narratives flow through Pittsburgh, from those of a blue-collar, steel-producing town to those of a recent renaissance for tech companies to those of Black communities disproportionately affected by gentrification, displacement, and inequitable drug sentencing laws. No single story is complete without the others, but the essays and poems that make up The Pittsburgh Neighborhood Guidebook are a good place to start.

The collection of 37 poems and essays from Belt Publishing was edited by Ben Gwin and is the fourth in Belt’s series of city guidebooks. Published April 6, the book features 26 contributors who vary in age, writing experience, and connections to Pittsburgh. Some were born and raised here, some are transplants to the city, while others once lived here but have since moved away.

The book is separated into three sections: “East Pittsburgh,” “Around Lawrenceville, Garfield, and Squirrel Hill,” and “Downtown, North, and South.” Particularly for the first section, the areas that it encompasses stretch far, from Swisshelm Park, Frick Park, and even out to Trafford.

Across much of the contributors’ work runs the themes of change and of hiraeth, a longing or homesickness for something that is lost. Bars that no longer exist, a school campus that was torn down and rebuilt in a supposedly safer image, people who have floated in and out of other people’s lives, entire neighborhoods that are barely recognizable to their own residents.

Gentrification looms large throughout the collection, and contributors approach it from many perspectives — as those who are part of communities and scenes being pushed out, as in Rich Gegick’s “Downtown,” and as those who consider themselves gentrifiers, like Jason Vrabel in his essay “Lawrenceville’s Do-Dah Days Are Over.” Some examine gentrification as a systemic issue, while others zoom into the personal and granular. Brian Broome’s “79” stands out as a series of vignettes routed through observances of the seven sins in the East Hills and of people about to be displaced.

Other systemic issues, including mass shootings and drug addiction and sentencing, appear in similar ways — sometimes zooming in and out within a single piece. Brittany Hailer’s “Miracle in Beltzhoover” is memorable for its depiction of drug addiction through the stories of brothers and friends who drifted apart and came back together through parallel journeys of addiction and recovery.

The collective traumas of shootings ripple throughout the book, with multiple pieces reflecting on the Tree of Life shooting. There are also two accounts of Richard Baumhammers’ anti-Semitic and racist shootings: Vince Guerrieri’s “The Bars of Dormont,” which reflects on the trauma of covering traumatic events as a journalist, and Bowie Rowan’s “The Suburbs Are Stunned,” the last piece in the collection, which grapples with the despair and fear that follow in the wake of such violence.

Some pieces end with wavering certainty for what can become of the city; others offer glimmers of hope or projections for the future, but many aspire to neither. They simply present what Pittsburgh once was, and what it now is. Intimate close-ups where time seems to freeze — punching a frat boy outside of the Original Hot Dog Shop in Dave Newman’s “I Was Heading to the O on Forbes Avenue in Oakland,” a colony of ants taking over a dead sparrow’s carcass on Negley in Cedric Rudolph’s “Bitter Melody” — punctuate the collection, and the shifting length and tone of the pieces makes it feel alive, like its lungs are expanding and contracting with you as you travel from neighborhood to neighborhood.

As the city continues to change, this collection will remain as a touchstone and snapshot of who we were, and the collection’s last line from Rowan will continue to echo: “Why would anyone want to kill a creature as beautiful as us?”

Pittsburgh's People of the Year 2021: Literature