The Pittsburgh Moment: It's happened before

"Something just happened with music and young people in Pittsburgh." 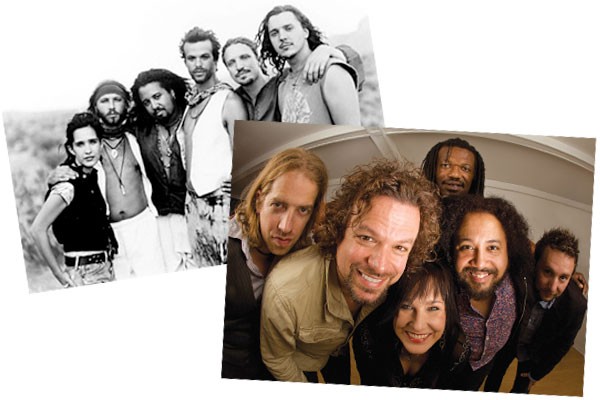 Sometime around 1995, Bill Deasy, along with his then-band The Gathering Field, stumbled upon a little fame in the traditional way: by writing a song that a lot of people really liked. Deasy wrote "Lost in America" one morning, rather quickly, and it became the hit at their regular Thursday-night gig at Nick's Fat City. When WDVE started playing a demo of the song a few weeks later, Deasy chuckles, "The phones lit up."

"Suddenly, instead of playing Thursday nights," he says, "we switched to Fridays and Saturdays. Instead of playing for free, people were paying a $10 cover, and we were selling out one night, then two nights, then three nights. I remember people around the block, it was just awesome. And everybody knew that song. It was really just one of those magical experiences."

Today, it's hard to think of any local artist who could sell out a 600-capacity venue three nights in a row — of course, having a regular night in a mid-sized club is itself largely a thing of the past. Most bands stick to small DIY venues and bars. For those who are able make the leap to venues like Stage AE — or even arenas like CONSOL Energy Center, as Wiz Khalifa did last year — the gestation period tends to be shorter. Things were a little different in the pre-Internet, major-label-dominated mid-'90s, and many Pittsburgh musicians, especially those playing radio-friendly alternative or country-tinged rock, look back on the decade as something of a golden age.

"It was just a great time," recalls Doug Edgell, then a member of modern rockers Sleeping Giants, who attracted some attention after winning a national talent search and appearing on Late Night with Conan O'Brien in 1997. "A thousand people would show up to see a group on a Thursday night. I was playing music, at that time, as my only source of income, and all the musicians that we knew at that time, they did it for a living. It was wonderful."

Bands like Brownie Mary and Vibro Kings dominated marquees, and Billboard Magazine hyped up-and-comers The Clarks, who — among other accomplishments — had only begun winning their long series of "Best Band in Pittsburgh" contests. For some, it seemed a gold rush was coming.

"There was definitely that sense that Pittsburgh was the next Seattle," Deasy says, referring to the attention that city experienced as the center of grunge a few years earlier. The near-overnight success of "Lost in America" attracted attention from Atlantic Records, which — likely hoping to repeat the label's multi-platinum success with Hootie and the Blowfish's hit record Cracked Rear View — signed the band in 1996. "It was a sturdy time, in terms of loyalty and the relationship between bands and a Pittsburgh audience," Deasy says. "Something just happened with music and young people in Pittsburgh."

There are parallels between Deasy's experience and what some might consider a new golden age of Pittsburgh music. However, while artists like Mac Miller and Wiz Khalifa are locally based to one extent or another — and while they inspire a sense of "Local Boy Does Good" in many fans — these acts seemed to blow up on a national and global scale before they were household names in Pittsburgh.

While fans of the Gathering Field and other bands of that era gathered in clubs shows on a regular basis, fans of Mac and Wiz, among others, gather around the Internet. "Black & Yellow" and "Frick Park Market" aside, it's hard to pinpoint what emotionally ties this stuff to Pittsburgh. That's not because the artists didn't hustle hard in Pittsburgh early on, but because the live hip-hop scene locally in the mid-'00s wasn't huge, and the mechanisms for "breaking" as an artist weren't as closely tied to local success as in the '90s rock scene.

One of the city's all-time biggest exports, Rusted Root, once might have inspired some similar questions about regional identity. After forming in 1989, the band's multi-instrumental global fusion — which didn't necessarily fit in with the straightforward rock that so many others were playing — took off almost immediately. Its first show was the Graffiti Rock Challenge, an annual battle of the bands named for the now-defunct Baum Boulevard venue: Rusted Root came in fourth out of 152 entries. The band released an independent debut CD, Cruel Sun, in 1992 and, thanks in part to extensive touring, sold around 40,000 copies.

Then things started to get a little crazy. In a 1993 Pittsburgh Post-Gazette profile, frontman Michael Glabicki described feeling sick from the smoke and heat of a typically overwhelming crowd, adding, "We'll definitely have to start turning people away so that it remains enjoyable for all of us." As P-G writer Tony Norman put it, "Increasingly uncomfortable with mass adulation, Rusted Root has begun demythologizing itself." And that's before they had a national hit.

In 1994, the band signed with an enthusiastic Mercury Records, and released When I Woke, which — with the help of a song called "Send Me on My Way" — went platinum. Though Rusted Root was easily associated with popular bands like Blues Traveler and Dave Matthews Band (Spin made fun of all three in a 1995 piece called "Hippies al Dente"), Liz Berlin, a founding member of the band, attributes its success to what was missing from music, both locally and nationally.

The Gathering Field circa the mid-'90s

"There was a lot of amazing talent in Pittsburgh," she says. "But I think we were a really new sound, and a really new musical phenomenon. The only people who were really doing anything like it at the time were Peter Gabriel and Paul Simon."

Mercury sent Rusted Root to record When I Woke in Pasadena — a typical move at the time. But in the wake of the industry's more recent decline, local musicians have more opportunities to record close to home. Wiz Khalifa, Anti-Flag and Centipede Eest, among many others, have worked with folks from ID Labs, Mr. Small's (which is owned by Berlin and her husband, Mike Speranzo) and Treelady Studios. And despite garnering national attention, Mac Miller and Wiz Khalifa have both taken the relatively fresh route of signing with a small, locally based label, Rostrum Records.

Over the years, Rusted Root has managed to adjust to changing times as well, thanks to the sometimes divisive weirdness of its aesthetic, and the fact that band members don't really care what the haters say. In 2012, for example, "Send Me on My Way" was featured non-ironically in an Enterprise Rent-a-Car commercial, and somewhat ironically in an episode of Fox's The New Girl. The band can also still draw a crowd, and recently finished a tour supporting its new record, The Movement.

Things turned out a little differently for Deasy and The Gathering Field, who were lost in the shuffle at Atlantic, and eventually got out of their contract. "We did kind of fall victim to the belief in the old model where you sign a deal and your ticket's written for you. We lost a little bit of our edge when we were kind of in that limbo period," Deasy admits. "It was the end of the really traditional rock-star model of the record industry, where there was just a certain way you did things. We were right at the end of what we didn't quite know was a dying beast."

That was hardly the end for Deasy, however. He's enjoyed a long career as a singer-songwriter — Good Morning America used his song "Good Things are Happening" as their theme for four years — and he'll release a new solo record, Start Again, in April.

Ultimately, it's hard to say how much national attention Rusted Root brought the region, or how much thought their fans across the country gave to where the band came from. But at the very least, Berlin argues, the band was responsible for an attitude shift.

"Pittsburgh as a whole had a really big inferiority complex," she says. "I think it has a lot to do with the potential consumers who just weren't impressed by anything. And I feel like us breaking out helped to remedy that because we were so new and because we had such huge success."