“We see the Knights as being the fourth major global franchise in Pittsburgh.” 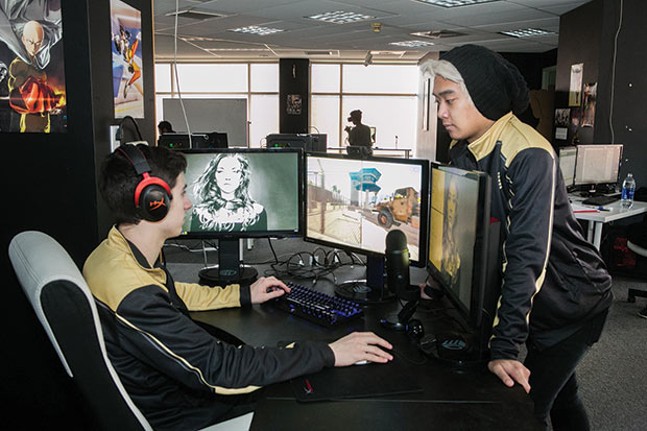 The definition of an athlete is evolving, whether purists are willing to embrace it or not.

In the past, a person who spent his free time sitting at a keyboard or a gaming console was considered a couch potato. But these days, that person can be revered by audiences as highly as a Super Bowl-winning quarterback. It’s not full contact, but it’s still physical. It’s not on a field, but it fills stadium seats.

But the question is: Is Pittsburgh ready to fully embrace eSports?

For the Pittsburgh Knights, a newly founded eSports franchise headquartered in Hazelwood, its owners Rob Lee and James O’Connor hope the answer is yes.

“We see the Knights as being the fourth major global franchise in Pittsburgh, because eSports is global, and the games unite a global audience,” O’Connor says. “We’re doing our best to represent Pittsburgh.”

In layman’s terms, eSports involves playing video games at a competitive level. But it’s not just a game — careers are made from it. O’Connor and Lee unveiled the Pittsburgh Knights on Dec. 1. The franchise is represented in three eSports: Hearthstone, an online deck-building game; Super Smash Bros. Melee, the second title in Nintendo’s fighting game series; and PlayerUnknown’s Battlegrounds (PUBG), a battle-royale-style shooter that boasts 30 million players online since its release last year.

O’Connor is a veteran Counter Strike competitive player and coach, and a former co-owner of the LA Renegades (now Detroit Renegades). Lee is a former team manager for the Renegades, and got his start in eSports producing videos for SK Gaming, a German eSports franchise.

By the end of 2017, the eSports industry was valued at $1.5 billion — more than double the value that analysts predicted at the start of 2017. As a spectator sport, it has sold out stadiums and consistently packs theaters and convention halls.

“Pittsburgh doesn’t have anybody — we’re talking on a global scale — that knows eSports,” O’Connor says. He says Pittsburgh has the demand for eSports and the scene is “about to explode, but there’s no infrastructure. That’s what we’re building.”

Their intention, O’Connor says, goes beyond building a team. The plan is to attract large competitions to the city, to develop technology to make streaming games more viable, and to garner community support. While the Knights have started small — it has just six athletes across three games — Lee and O’Connor say expansion is inevitable.

Pittsburgh’s Steve Abate, one of the best Super Smash Brothers Melee players in the world, is one of those elite players and likes the team support. “It’s not like I’m just playing for myself now,” Abate says. “I’m a part of a team. It used to be an individual trying to win. Now it feels like the city is behind me — for better or worse.”