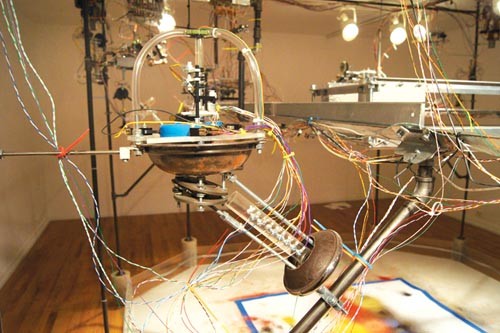 Circuit rider: Adam Shreckhise's "Portrait of the Artist as a Machine (PAM)."

Still, you wonder whether Pittsburgh Center for the Arts curator Adam Welch saw a sign of the times in Dennis Maher's "Planisphere." It's a room-sized assemblage of demolition debris: bedposts, corrugated fiberglass sheeting, tarpaper, electrical cable and old lamps. With its basically cyclonic shape, "Planisphere" mesmerizingly suggests a crashed space capsule fabricated from garbage, or a run-down house half-sucked into a vortex.

Things fall apart and the center is a black hole? In this two-floor, installation-heavy 16-artist exhibit -- the PCA's leg of the five-venue Pittsburgh Biennial -- there's plenty more to evoke a world buckling. A different sort of disaster is echoed in Gregory Witt's "Meteor." Witt is known for his mechanized installations, but "Meteor" is motionless: the plywood skeleton of a carefully crafted, geodesic-style sphere, with polystyrene plating and inset spray-paint cans. It feels like a monument to a projectile that smashed into a planet that's no longer with us.

Meanwhile, from its perch on the PCA's grand stairway, Jacob Ciocci's "Trapped and Frozen Forever #4" seems to ask whether we're still with us. Who is the subject of this big-screen HD animation, full of cartoon noses, eyes and arrows, all constantly shifting and exploding, all vaguely menacing? Though Ciocci's signature style is echoed in a pair of collages on flanking walls, the only literal content is briefly interpolated news footage of things being burned: both Harry Potter movie posters and former U.S. Senate hopeful Christine O'Donnell (in witch-costumed effigy).

It's amusing that Elizabeth Mooney's meditative, semi-abstract acrylic painting "Above Valleys Below Cairns" shares a room with Paul LeRoy Gehres' "I'm a Lover Not a Fighter." Gehres' crazy-quilt installation blankets two whole gallery walls floor-to-ceiling with scarf-like textiles, most bearing screen-printed tributes to everyone from Osama bin Laden and Bernie Madoff's wife to Howard Zinn, Amy Winehouse, Carrie Nation, police beating victim Jordan Miles, and curators of other Biennial shows. It feels like a commentary on, and a celebration of, our channel-surfing zeitgeist. A dozen foam circles bearing the legend "Dead Line August Second 2011" suggest it's all something of a thrown-together jest. Or is this just a tour of the artist's mind?

Duck behind one of Gehres' walls for Jesse McLean's "Relations." The video-loop one-liner depicts a newspaper spinning too fast to read that finally stops to reveal the headline: "First Line to Last: A Tissue of Horrors."

Indeed, so might say the peasant refugees in Chris Kardambikis' vividly colored, comics-style mural "Katabasis." These unfortunates seem to be fleeing some Buck Rogers-meets-Greek-myth war of tunic-wearing humanoids against a bear, a massive subterranean serpent and one multi-eyed, many-armed fellow. And who could blame them?

It's all enough to make you want to hide inside Mark Franchino's "Garbage Can Series: Workshop," a full-sized trash receptable cleverly wrought from poplar and filled with scraps and shavings. Franchino's piece sits outside the room housing Adam Shreckhise's "PAM (Portrait of the Artist as a Machine)." The latter is less celebration of mechanization, however, and more self-deprecating quip: A large frame of plumber's pipe is mounted with two dozen electrical devices, their wires exposed, their arms, gears and rotors buzzing and whirring. One assembly (which must move, though I saw it only stationary) holds eight tubes of pigment that had deposited on the floor a motley abstract. The artist, it seems, is endlessly busy, dubiously motivated.

That's order of a kind, of course. So too in William Kofmehl's "Vicarious Suffering: A 21st Century Site." Out front is video of Kofmehl belly-flopping on the marble floor of the Lincoln Memorial, plus a glassed-in tableau of a male figure, also belly-flopping while hung above a tabletop full of objects including a boomerang, a femur and a stalk of broccoli. Behind, a darkened passage leads to a single knothole through which one views a large, unfinished attic-like space, which contains a huge American flag and is littered with children's drawings and beaded bracelets. On opening night, the room held two small blonde girls in white party dresses, drawing on sketch pads while a man in beekeeper's togs harvested honey from a man-made hive. The artist dines on symbols.

There's more, including Thea Augustina Eck's contemplative video installation "April 24" (marred by muddy audio) and Natalie Settles' lovely "Ornament and Architecture," rendered in 2-D in graphite and white lacquer. Other highlights include Jen Gooch's "Come Clean," in which two dozen paper silhouettes -- socks, dresses, T-shirts -- hang on lines, serving as screens for simple video projections while a voice-over relates a sort of clothing memoir, consisting of moments alternately embarrassing and nostalgic, mostly from childhood. There is redemption, at least, in memory.