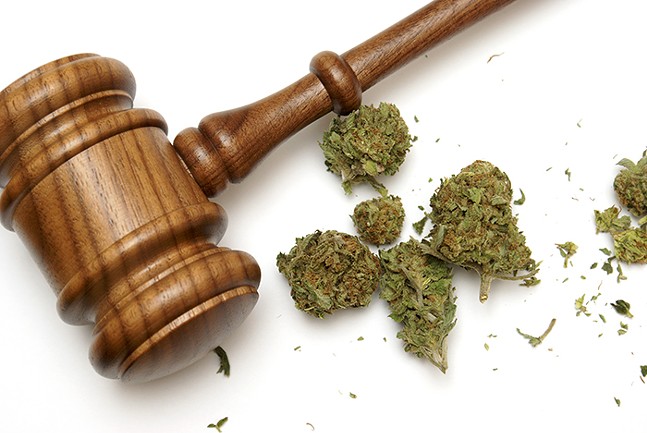 Many new laws and policies have made marijuana more accessible — like Pennsylvania's medical cannabis law passed in 2016 — and less punitive, such as the decriminalization of small amounts of marijuana enacted by several cities, including Pittsburgh.

These smaller marijuana victories have been championed by advocates, but despite efforts leading to legalization of marijuana in neighboring states near Pennsylvania, including both New York and Virginia just last week, weed for recreational use is still illegal in the Keystone State.

Patrick Nightingale, director of cannabis advocacy group Pittsburgh NORML and a criminal defense attorney, wants to remind marijuana users, both medical and recreational, of these hard facts. He still has many clients in the Pittsburgh area facing marijuana-related charges.

“People can get a little bit of information and interpret it as much broader than it actually is,” says Nightingale. “I want to convey to people to just continue to be cautious. We have won certain rights, however, law enforcement doesn’t understand all of those rights.”

For example, even though Pittsburgh decriminalized small amounts of marijuana in 2015, there have still been hundreds of marijuana-possession arrests each year since that passage. Nightingale says this is because officers can still follow the state code, which says any marijuana possession is illegal, and not all Pittsburgh officers have come around to the cultural change to hand out citations over small amounts of marijuana instead of charging people with misdemeanors. With this in mind, here are the Pennsylvania criminal statutes related to marijuana that often jam people up, according to Nightingale.

Possession
Pennsylvanians can be charged with misdemeanors for large or small amounts of marijuana possession under 35 Pa. Consolidated Statutes Annotated section 780-113 subsections (a)(16) and (a)(31). Subsection (a)(31) is the state’s small amount possession law, which means a person possessing or distributing, but not selling, 30 grams of marijuana or 8 grams of hashish can be charged. A conviction under this small amount possession law can lead to up to 30 days in prison or a fine of up to $500, in the strictest interpretation of the law. Outside of licensed medical dispensaries, selling marijuana, even small amounts, is a felony.

Pittsburgh police can, and many do, issue citations for small amount possession, instead of misdemeanors. But Nightingale says that not all officers use the citations, and some still charge people for misdemeanors under subsection (a)(31). And even though small amount possession charges are almost always lowered down to summary charges in Allegheny County courts, Nightingale says this still means people are fingerprinted and have records for charges in the state’s court system.

Additionally, Nightingale says it’s usually only small amount possessions reduced to summaries. Pennsylvanians can still be charged under subsection (a)(16) for possession greater than a small amount. He says officers are likely to charge people under this statute if they believe people to have more than 30 grams of cannabis or more than 8 grams of hashish. This charge can lead to up to one year in prison or a fine up to $5,000.

“Act like it is still illegal,” Nightingale says. “It sucks to say that, but when it comes to potential law enforcement encounters, it’s best to act like it’s still illegal.”

Paraphernalia
Nightingale says that the state’s drug paraphernalia law is very broadly defined, which can lead to more charges than people realize. He says that even things like plastic sandwich bags can be identified as paraphernalia if there is evidence that they are used to pack or contain marijuana. Anything that is used “for the purpose of planting, propagating, cultivating, growing, harvesting, manufacturing, compounding, converting, producing, processing, preparing, testing, analyzing, packing, repacking, storing, containing, concealing, injecting, ingesting, inhaling, or otherwise introducing into the human body a controlled substance” is a violation of the statute.

According to a post on Nightingale’s legal website, at least one local District Attorney’s office has taken the position that a patient may only lawfully possess devices and instruments purchased from a licensed dispensary. And that some local marijuana patients have been charged under the state’s paraphernalia statute.

Medical patients and growing
Medical card holders in Pennsylvania have significant access to medical marijuana from licensed dispensaries, but there are still laws and some loopholes that can lead to charges.

For example, medical marijuana patients can be charged with DUIs even if they just have trace amounts of THC in their systems. Lawmakers are trying to fix this law, since THC can remain in patients' systems weeks after use, but that fix hasn’t yet been taken up by the state Senate. For this reason, Nightingale advises medical marijuana patients to not tell police officers they are licensed card holders if they are pulled over, and are not asked by officers. He says some well-meaning patients have actually told police officers they are patients, out of transparency’s sake, which has led to DUIs. “I know a lot of patients that have walked into DUIs,” says Nightingale, who adds that patients should only tell officers they are medical card holders if asked.

Lastly, and most seriously, is subsection (a)(30), which is felony manufacturing, distribution, possession with intent. Nightingale reminds Pennsylvanians that growing even just one single marijuana plant is illegal in the commonwealth, and can be charged as a felony, even for medical marijuana patients.

Advocates have been trying to change this for medical patients, but amending Pennsylvania’s medical cannabis law has been difficult. Nightingale says Allegheny County courts aren’t as likely to charge felonies for people growing just one plant, but surrounding counties aren’t as lenient.

Growing is not the only thing included in subsection (a)(30). People who aren’t authorized by the state (aka licensed medical dispensaries and growers) violate that law when they “manufacture, delivery, or possession with intent to manufacture or deliver, a controlled substance.”

Violating subsection (a)(30) in relations to marijuana can result in imprisonment not exceeding 15 years, a fine up to $250,000, or both.