The Pirates of Penzance

This is a production about swords. Swords and endless mugging. 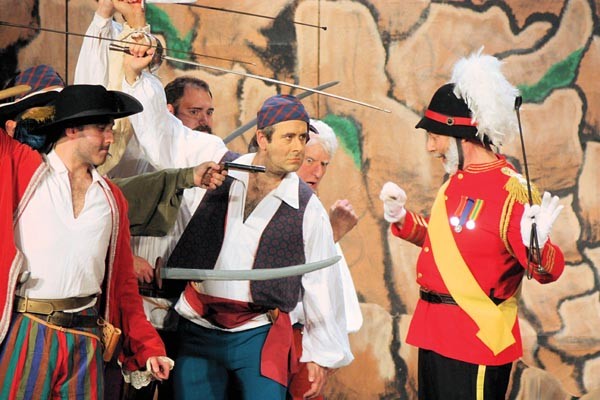 THE PIRATES OF PENZANCE

Gilbert & Sullivan's operetta The Pirates of Penzance is 133 years old. And if you have any doubts about that, just check out the latest Pittsburgh Savoyards production.

Before we get into the review, here's an interesting factoid: Because copyright protection didn't exist in America at the time for works by foreigners, Britishers Gilbert & Sullivan — hoping to stave off illegal productions in the U.S. — actually debuted Pirates of Penzance in America, on Broadway, in fact, before they opened it in London.

Their London theatrical home was the Savoy Theatre — which is why the Pittsburgh Savoyards call themselves that. This production of Pirates is part of their 73rd season.

Imagine a local theater having been in constant production since 1938! What's more amazing is that this decidedly "community theater" boasts a full live orchestra at each performance.

The more astute will notice I'm taking an even more than usually lengthy time getting to the actual production. How many times in 73 years, one wonders, has The Savoyards produced The Pirates of Penzance? Because you'd figure, really, that they'd have to be better at it by now.

It's a very morose evening, I have to say, with mostly nonexistent acting and no visual evidence of direction. On the plus side, musical director Guy Russo and his orchestra give the score a spirited run, and the singing, for the most part, is quite good.

But musicals aren't just about the audio. They are — or should be — a theatrical presentation, and director Robert B. Hockenberry seems utterly at sea as to what's required. Creating and managing blocking, stage traffic, tableaux, climaxes, acting choices, emotional beats, dramatic structure ... none of this has been attempted. But he sure loves his props: This is a production about swords. Swords and endless mugging.

Leon Zionts manages to emerge the most unscathed, playing and singing the very model of the modern Major-General Stanley with authentic flair and polish. Several roles have been double-cast; on the night I saw the show, Sean Lenhart and Sabina Balsamo provided some much need entertainment as the Pirate King and Mabel. (Zachary Luchetti and Elisabeth Rishel perform these roles on alternate nights.)