The Pirates have had 44 first basemen since 2004 and yes, they’ve all sucked | Sports News | Pittsburgh | Pittsburgh City Paper

The Pirates have had 44 first basemen since 2004 and yes, they’ve all sucked

That position has been an abyss since 1982. That year, Jason Thompson represented the Pirates at the All-Star game as a first baseman. It was the last time that happened. Since then Pirates first basemen have had the job security of Van Halen frontmen or the actors playing Col. Sanders.

Since 2004, 44 different guys have tried out for the role. That’s one more than the total number of presidents of the United States since 1781. (Grover Cleveland is counted twice for some reason that I’m too lazy to look up.) Somehow, though, the position still pays more than our commander-in-chief gets. 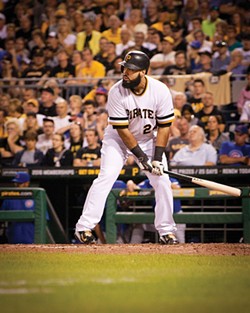 CP file photo by Heather Mull
Pedro Alvarez is a free agent; maybe we can sign him

This season will see Sean Rodriguez, Michael Morse, Jason Rogers, John Jaso and rookie Josh Bell all compete to hold the job for longer than a season. Some of the past names sound impressive, like Sean Casey, Adam LaRoche, Derek Lee and Justin Morneau. But they were either past their primes or just rented players.

Others, like Travis Ishikawa, John Bowker, Josh Phelps and Brent Morel, never sounded or looked impressive. Nothing seems to work. They’ve even tried players who have never played there before. Pedro Alvarez, Aramis Ramirez, Jordy Mercer, Rod Barajas and Xavier Nady all tried it, but nothing stuck. It’s not an easy place to play; it’s not like Little League where you just throw the biggest kid there because there’s little running involved.

Arguably the best of the bunch was Craig Wilson, who played there from 2001 to 2006. Wilson hit 94 home runs as a Pirate but never got the full-time job. In his five years with the Bucs, he saw Carlos Rivera, Randall “Sausage” Simon, Daryle Ward, Rob Mackowiak, Ty Wigginton, Joe “The Joker” Randa and Jose Hernandez all share duties with him. Jose Hernandez struck out so much he was nicknamed “The Windmill.”

And that’s only half the list! Lest we forget such forgettable names like Andy LaRoche, Matt Hague, Bobby Crosby, Chris Gomez and Ryan Doumit. Whatever you do this season, do not buy a jersey of a Pirates first basemen; that’s been a bad investment since Willie Stargell retired. Just ask the people who got burned buying Brad “Big Country” Eldred, Garrett Jones and Lyle Overbay jerseys. At least those jerseys were available. Eric Hinske, Brandon Wood and Brandon Inge weren’t around long enough to have one made.

Last year, Pedro Alvarez was such a mess at third they figured it couldn’t be worse at first. He had to be better than Andrew Lambo, Casey McGehee and Gaby Sanchez, right? Sadly he was not, at least not defensively.

These names are a veritable Who’s Who of mediocrity. Doug Mientkiewicz and Steve Pearce were decent players; Jeff Clement was not. His name is only one letter off from “Clemente,” but comparisons abruptly end there. Somehow I forgot that teen heartthrob Corey Hart also took a turn at first last year, but surrendered with an injury.

Being the Pirates first baseman is like being the World’s Oldest Man; you may be on top for now, but it will inevitably end soon. So this year will rookie phenom Josh Bell take over the position, or will one of the four other guys establish themselves? The Pirates might have to go outside the organization and find somebody.

Right now, though, the only available free-agent first baseman who’s even half-decent is Pedro Alvarez. Maybe they should sign him.